History of Gingerbread-makers in Český Krumlov

Old gingerbread moulds and period recipes inform us what gingerbread looked like in the 17th and 18th centuries. In the District Museum of National History in Český Krumlov a large collection of Baroque gingerbread moulds can be found; the two oldest ones are dated earlier than 1645. Gingerbread-makers themselves carved the forms from pear wood. The dough made from honey, rye flour and spices was pressed into the forms sprinkled with pea flour which was to prevent from sticking.

The range of mould motifs from Český Krumlov is very rich. Among the most often used topics are an infant in swaddling clothes, heart, soldier, fish, cavalier, lady, flowers and many other figurative and ornamental motifs. An interesting set consists of forms with religious motifs. These are portrayals of the Holy Virgin with the Infant Jesus, saints and church symbols. The gingerbread of such forms was particularly sold at places of pilgrimage. Molds with the fish motif are typical of Český Krumlov. It is said that gingerbread fish started to be made in connection with a legend about a great drought which had distressed the whole district at the beginning of the 17th century until the cloud-burst put it to an end after which water overflew the banks and fish appeared everywhere. It is rumoured that the rain was achieved through the prayers by the inhabitants of Český Krumlov and České Budějovice in the Pilgrimage Church Kájov.

Ginger-bread was bought as presents for children, it was possible to declare love by means of it and not last the ginger-bread was used for cooking as it was added in various kinds of sauce or it was used to sprinkle gruel with. 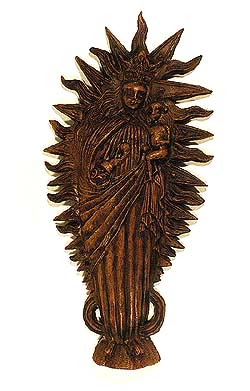 The dough is treated on a pastry board, sieve the flour and add the other ingredients. Make a rather tough dough and carve out the shapes; bake them on a thoroughly greased baking-sheet. After cooling, decorate the ginger-bread with white icing.

Other information:
History of Guilds and Crafts in Český Krumlov