Foundation of the monastery in Vyšší Brod 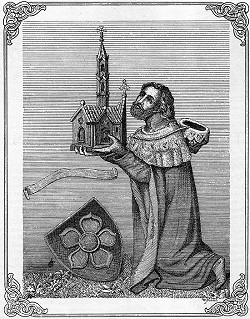 Tracking preparation of Vok of Rožmberk for founding of monastery, which can be sounded by written sources, we have to notice a relation between king Přemysl Otakar II. and the Witigone. Vok of Rožmberk hold an important role in the Rožmberk's manor. Since 1255 he has been lifelong marshal of kingdom. The establishment of monastery is according to Jaroslav Čechura the best recorded one of all foundations in Czech lands in period of the Přemysl dynasty's rule. The Cistercian order originated in Burgundy at the end of the 11th Century. It was one of reformation orders reflecting the different between ideals and real life of then monasteries. The members of order were coming from original St. Benedikt's order from the 6th Century. They demanded separation from a secular world, return to simplicity, poverty and work. Benedikt's "Ora et labora" (Pray and work) became the program of Cistercian order. The first monastery of this order was found in 1098 in Citeaux in French Burgundy Southward from Dijonu. Citeaux, in Latin Cistercium, gave a name to order. In Bohemia originated the first monastery in years 1142 - 1144 in village Sedlec. Before one in Vyšší Brod were in Bohemia found seven monasteries.

A unique is non-dated document from Vok of Rožmberk, in which he asks the abbot in Citeaux for permission to build the Cistercian monastery, which was supposed to be settled by monks from Austrian Wilhering on the Danube by Linz. Vok in this document promises to give to the monastery possession with year benefit of sixty talents and two vineyards. Preserved command from general chapter of the Cistercian order taking place in Citeaux in year 1258 bids abbots from Baugarttenbeg and Pomok to inspect place "in quo funtare intendit abbatiam monachorum nostri ordinis vir dominus de Rosamberch marescallus Bohemiae". In next year was this command repeated because no visit passed off. Because the general chapter was meeting after year 1233 always on September the 13th and it took five days, we can document "terminus ante quem" Vok's record before September 1258. Command for inspection had to be approved at meeting of general chapter where it had to be presented by Wilhering's abbot. 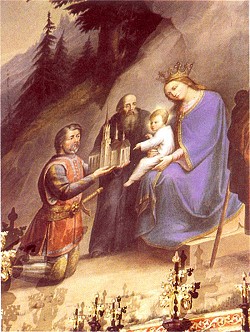 Preparation for foundation of monastery in Vyšší Brod started in May and June 1259 according to canonical law. The act of foundation was inspected by Prague bishop Jan III. of Dražice, who travelled to the South via Týn nad Vltavou, where he released on May 23 1259 a record confirming Vok's gift of patronage rights to churches in Rožmitál na Šumavě and in Přídolí. It is remarkable from a document that it did not come to real foundation because acceptors of Vok's gift are called just "fratres Cisterciensis ordinis".

Professor doctor father W. Schmidt describes consecration of monastery in Vyšší Brod: "On Sunday June 1st 1259 Prague bishop Jan III. of Dražice accompanied by many of noblemen and people consecrated monastery's church. The main altar made of altar stone with simple cross above it and Vok of Rožmberk in front of everybody verbally repeated donation, which was given to hands of the abbot Otto and twelve monks called here from Wilhering. They have sooner picked the place to settle and built provisional shelters". Mr. Josef Stöcklou in German chronicle of Vyšší Brod writes on page 11 : "..monastery's church, then just a wooden provisory building.." and father Dominik Kaidl tries to more intimately describe foundation record as well as other two documents released in the same day by Budivoj and Vítek. He writes: "..first June 1259 is a day of foundation of monastery in Vyšší Brod. There is no mention bout an abbot and convention". Jaroslav Čechura based on analysis of foundation document writes: "Formulation of document made by bishop's office shows that monks from Wilhering, which were supposed to settle the monastery have not come yet. It is just a canonical confirmation of the new foundation. It also shows that in year 1259 have not had Vok his own notary. Document could not be written by monks because the whole act of foundation pass off without their attendance". 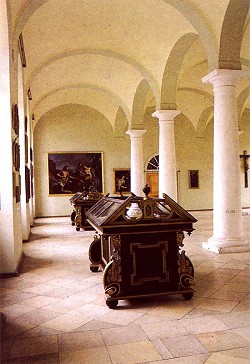 I picked this wide scale of opinions on June 1st 1259 deliberately. I have to mention here that till September 13th 1259 the inspection commanded by the general chapter in Citeaux has not been done yet. So it is possible that there were no monks in Vyšší Brod on June the 1st 1259. Donation that consists of various gifts reminding us donations from princely period. The main gift was a "monastery's wood", which borders are exactly given in document. The whole large area between Vltava and land border, which the new monastery received was very indented, mainly covered by woods. In a long list of gifts prevail partition on a feudal income, though the form is not specified. Also the dispersal of villages which paid a tribute to monastery was great.

An origin of monastery in Vyšší Brod is except for historic documents and records clouded with legends which are interesting for readers and listeners. Father Dominik Kaidl found in handwriting from June 30th 1629 a legend, in which is written: "At that place of monastery's cemetery, where today stays St. Anna's chapel, used to be an old one. There was placed an painting of God's Mother Sorrowful with dead Jesus Christ on her lap. So Vok of Rožmberk, who had his seat at nearby castle Rožmberk, wanted on one day do carry out a service in chapel. To reach the chapel he had to cross Vltava river. In this time had Vltava overflowed and Vok was risking his life. For memory of this event he let built a monastery at place of chapel". Origin of this story can be in historic fact. Vok's life was endangered during escape over Inn river after a battle at Mühldorf upon Inn on August 25 1257, where the duke Ludvík II. Bavarian defeated the king Přemysl Otakar II. The chapel at the monastery's cemetery, sacred to God's Mother appears first time in document from July 22 1385. St. Anna's chapel is first mentioned on painting of the first abbot in Vyšší Brod, Otto. This painting had been made in years 1608 - 1620. On painting of the first abbot is located Latin inscription which says that "Otto, the first abbot on Vyšší Brod from monastery Wilhering came with 12 monks to the son of Petr of Rožmberk in year 1259". This Otto had been the first abbot in monastery in Vyšší Brod since 1259 till 1281.