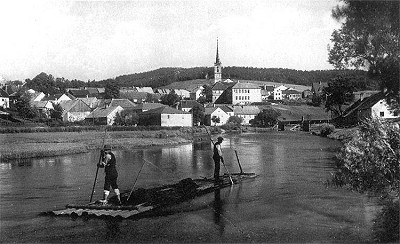 The oldest document about sailing the wood on Vltava is a founding record of monastery in Břevnov about mills and weirs on Vltava. It comes from 883. Since year 1088 the duty from wood sailed on Vltava has been first time collected in Výtoň in today's Prague. In 1130 part of this wood had used to be given to Vyšehrad church as a duty. During the life of Jan of Rožmberk, who died in year 1472, writes the royal scribe Jan Chvala: "And so we sent sailors, to sail the raft down the river..." In year 1530 proposed Štěpánek Netolický that upper Vltava shall be canalized, because in surrounding forests started massive building wood extraction. Around year 1552 let Albrecht of Guttštejn Vltava canalized from Vyšší Brod to České Budějovice. It brought work to several thousands of people. During these adaptations the weirs for rafts were constructed as well. Volume of sail was rising and in 1635 started with wood sailing even monastery in Vyšší Brod and in year 1650 Krumlov Jesuits.

In year 1766 were sailed rafts from Želnava to Loučovice, where were they cut to logs and the river carried them away to Český Krumlov. Čertova stěna above Vyšší Brod stood in the way of discontented wood sail from upper Vltava. Cancellation of the wood duties in 1821 caused increase of demand for long wood and greater export of utilitarian wood to Germany. In years 1838 to 1841 the riverbed of Vltava had been adjusted again between Vyšší Brod and České Budějovice. Around year 1850 reached the volume of wood sailing from Šumava to Saxony its maximum. The Schwarzenbergs fearing that wood extraction could fall due to lucrative sale of it to Saxony traders, and so they brought the Saxony way of growing the wood - spruce monocultures. The spruce used to be the best building wood, what was reflected in its high selling price. In 1850 the Schwarzenberk's manor started to sail the wood on its own costs. 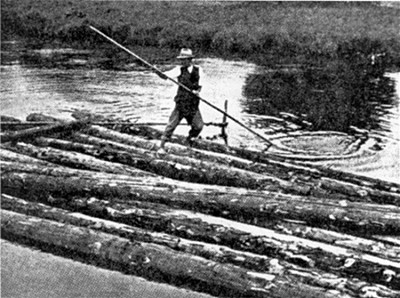 In 1850 had the Schwarzenberk's manor sailed from Vyšší Brod to Prague 15 thousands of Austrian fathoms of wood, what was about 42 thousands metric centners of wood. In years 1856 and 1859 was for fluent sail arranged riverbed above Lipno and according to Miroslav Landa "in years 1858 and 1864 the channel between Lipno lift and Vyšší Brod was built". In 1882 could be under better conditions sailed from upper Vltava to Prague more than million quintals of wood. From upper Vltava were sent only six-raft (about 120 meters long) streams of wooden timbers, which volume reached to 130 quintals of wood. In year 1898 were to Prague sailed on Vltava 2778 streams and in year 1903 flew from Vyšší Brod 1655 streams e.g. 280 rafts. Vltava was opened 120 to 150 days per year and so Vyšší Brod were leaving two streams a day, so more than ten rafts. 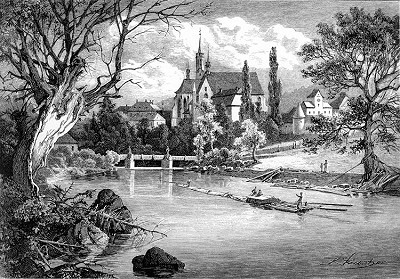 The WWI interrupted sailing of rafts and after that it never again reached its earlier volume. We have to mention here some sailors from Vyšší Brod. Josef Sípal wrote: "On October 10 1910 had passed an exam for sailing the rafts and received the Sailing patent, which entitles to transport rafts from Vyšší Brod to Prague. After an exam I was sailing with my father from Vyšší Brod. For the roping, cargo and sailing to Prague was a rafter getting 23 to 24 golden coins, the sail took eight days and wood was being sailed to St. Václav." Attendant Tomáš Sypal was born on January 13 1902 and remembers: "My grandfather sailed from Vyšší Brod for last time as an attendant, as he was 82 years old. In his team had been also my father Josef Sypal, who got killed by a log in 1915. I have moved to Vyšší Brod in 1926 and in the same year I became a rafter".