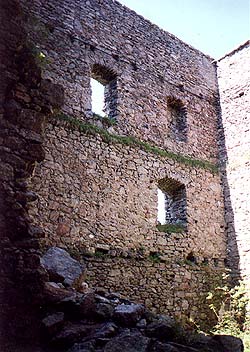 Location:
The little castle of Vítkův Hrádek is located on the border of South Bohemia and Austria above the village of Svatý Tomáš that no longer exists. It is situated to the west of the little town of Frymburk, on a wooded hill on the right bank of the Vltava river.

Origin of the Name:
The original Czech name of the castle was "Vítkův Hrádek" (Little Castle of Vítek - in the German language Wittingshausen). The German name Wittigstein that was sometimes translated into the Czech language as "Vítkův Kámen" (Vítek's Stone) was also used. Today we can find both names of this castle. The name of the castle proves that its founder was called Vítek, a member of the powerful South Bohemian aristocratic family of The Witigonen. According to the context of that period it is possible that the castle was founded by Vítek from Načeradec, otherwise from Krumlov, who was mentioned during the years 1220 - 1277.

Architectural and Historical Development:
The main, and the only building in the heart of the castle is a big residential prismatic tower which is extended on the east by a lower polygonal reconstructed building with triangular chambers on its side. The left chamber had its entrance from outside. The big tower built on the highest point of the hill was of the shape of a rectangle (13.7 x 17.5 metres) and was built of layered quarry stones. There was a bay on the west but only two corbels of it were preserved.

The doors leading to the middle part of the tower were originally accessible over the little draw-bridge of the opposite building. It was built as the entrance gate to the new fortification in the middle of the 16th century. The tower had above the flat-ceiling ground floor, illuminated from sides with five narrow openings, two living floors with lavatories on the west side.

The origin of the new five-sided fortification with walls, bastions and a gate on the east side is dated from the 16th century. In the walls there are broken loopholes with jamb-stones 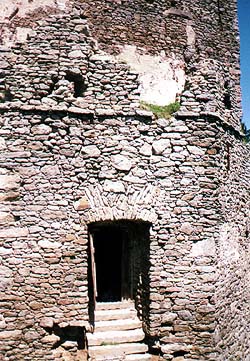 During the construction of the radio-telephone network station near the ruins of the little castle of Vítkův Hrádek in 1996 a basement made of quarry stone in mortar was uncovered. It could be remains of the already destroyed barbican.

History of the Castle's Residents:
>From the time the castle was established by Vítek z Krumlova (1220 - 1272) in the 13th century, it performed the function of a fortress and an administrative centre of the estates that were part of the growing dominion of the members of the Witigonen family. Their estates were spread on the both sides of today's border between the Czech Republic and Austria. The main part of the castle was made up by the residential tower built 1,032 metres above the sea level on a gradual strewn with granite stones, close to the path from Austria to Bohemia. The Witigonen wanted to ensure safe ways between their estates in Upper Austria. When the Krumlov family branch of the Witigonen died out in 1302 then Henrich von Rosenberg inherited the castle. In the end of the 14th century 15 villages and glass works were joined to this castle. At that time the castle became one of the places where king Václav IV was jailed in 1394 during his enforced journey to Austria, because of the controversy between him and the Czech aristocracy. During the Hussite wars the castle was owned by the Lords of Walsee but in 1464 Reinprecht from Walsee passed it over to his uncle Jan von Rosenberg and the little castle of Vítkův Hrádek became the property of the Rosenbergs again. During the insurrection of the Czech Estates the castle was captured by force by the revolting Czech aristocracy but already from 1621 the imperial garrison was in the castle. In 1622 the castle was passed over to the Eggenbergs and in 1719 the Schwarzenbergs inherited all the estates of the Eggenbergs. The little castle of Vítkův Hrádek slowly lost its function of a border fortification and fell into ruin. The duke's forester settled down there for a short period but in the middle of the 18th century the castle was completely deserted. In 1815 stairs with an observation platform were built in the south-east side of the castle. During this reconstruction the crown of the tower was made secure for the last time. The most important reconstruction was made in 1869. After World War II the whole region of the Svatý Tomáš village together with the castle became a part of the military border zone and access was strictly forbidden. In the fifties the soldiers made an observation post on top of the tower. Beside the castle that was under the administration and in use of the Czechoslovak people's army, a new steel tower - a watch-post was built. At the time a shelter for the sentry was also built. The representatives of the army passed the castle over to the property of the Přední Výtoň village in 1990. Until that time the ruins of the castle were not accessible to the public. Vítkův Hrádek castle inspired Adalbert Stifter to write his historical novel entitled "Vítek" (1865). 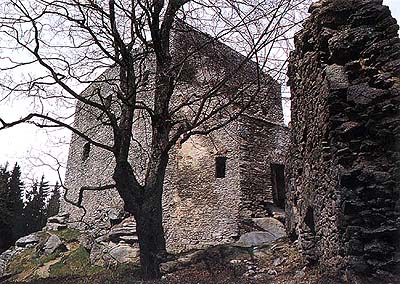 Tales and legends:
A story, telling about a family tendency to suicide and about a human anger, is from the secluded place called Pink Hill. A poor woodland worker and his many children used to live there. One day his wife died and they found him hanged in the forest. His brother thought in the morgue, what a shame on the whole family. He slapped the face of the dead person. Since that moment he had been constantly thinking about his dead brother. He was sorry about doing that and that he did not take care of brother's children. After certain time he hanged himself in his house. The youngest brother, lead probably with the family tradition, to show the curious people how much better he is than his dead family members, slapped twice the face of the dead person. The malevolent people put him down and called him names, laughed at his suffering in such extent that he hung himself on a linden behind the village. None of those dead persons was allowed to have a grave in consacred land. All of them were buried without a priest in a lonely place.

In a forest that surrounded the ruins of the little castle Vítkův Hrádek and from the Saint Thomas church people could hear cries and lamentations. A forester who wanted find out what was going on, stayed hidden not far from the church and at midnight he saw a phantom without a head sitting on a stone, wearing priest's habits and saying the words of a mass. When the priest finished his prayer he already had his head with sad face on his shoulders. He saw the forester and he blamed him for interrupting his a hundred years lasting atonement. He atones for he desecrated his mission of a priest because of a woman and he committed suicide. Now as the punishment he has to celebrate a mass in the forest for a thousand nights. On an advice of a parish people from surrounding villages became to pray every day for this lost priest and from that time cries and call from the forest was not heard.

Present use:
The owners of the object, village Přední Výtoň rented the castle to Civic Association for Vítkův Hrádek Castle which is concerned in preserving and stopping of further devastation of Vítkův Hrádek at Svatý Tomáš and opening it for public as a historical monument.