History of Glass Works in the Český Krumlov Region 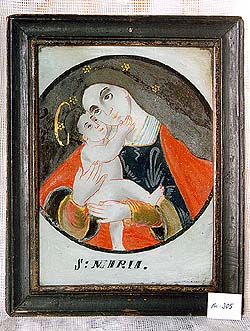 From the history of glass works in Kaplice

This region is geographically bordered on the west side by the Malše river, on the east by the Stropnice river, the north border is the hilly region of the Slepičí mountains and the southern part is enclosed by the wall of the Novohradské mountains. The natural resources provided the base for the development of glass works. Thick primeval forests provided ideal fuel for burning, also deposits of glass sands were found here and flow of water offered supply of energy. The colonisation of primarily German speaking population enabled the availability of cheap labour. This manufacturing potential was used by the end of the 14th and beginning of the 15th centuries for establishing of glass works.

The first glass works in this region, of which we have reports from 1401, was in Klažary. The mention of the glass works in Vilémova Hora (Wilhelmberg), today's Hojná Voda appears only in 1588, it was established by Wilhelm von Rosenberg, after whom it obtained its name. Glass of Venetian style, painted and gilded, designed mainly for the house of Rosenbergs, but which also became well known abroad, was produced there. After the closing of this factory at the beginning of the Thirty Years' War, Marie Magdalena Buquoy established in 1623 the glass works Nová Huť in Vilémova Hora, which was put into operation in 1677.

During the years 1673 - 1674 the French Louis le Vasseur d'Ossimont set up a glass works for the manufacture of crystal glass in Nové Hrady and ran it until 1689. They produced perfect clear hollow glass, lavishly shaped, from which they made different kinds of table decorations in the shape of animals, and boats. They also made opal glass, at that time newly developed opaque white bone coloured glass and glass with sealed sticks. 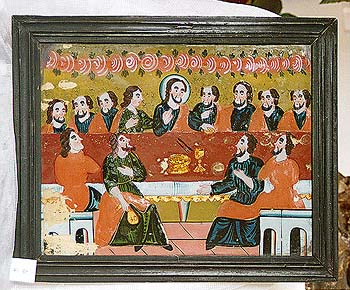 The plentiful and unused reserve of timber provided the starting of many glass works. Not far away from the closed glass works of Nová Huť, the third glass works called Křišťálová Huť was built. This one as well as the one in Nové Hrady closed down in 1705.

In the village of Údolí near Nové Hrady, grinding plants were set up, and their products were exported as far as Florence. As soon as it was found out that the newly established glass works were profitable, gradually new glass works were built in Lužnice (1677), in Pohoří na Šumavě (1693), in Mlýnský Vrch not far from Hojná Voda (1757). Jan Buquoy built Tereziina Huť (1764), later the glass works of Jiříkovo Údolí (1744), Janovy Hutě (1777), and later on the founder of the glass works in Lenora, Jan Mayer, set up the Pavlína glass works near Pohoří na Šumavě at the foot of Kamenec hill (1780), Stříbrné Hutě (1782) and the Bonaventura glass works (1794). The glass works in Černé Údolí was built as the last one(1837 -1838). Together with these glass works, workmen's houses were also built and later on whole settlements were established. The manufacturing programme in these glass works was different. In Pohoří na Šumavě they made sheet glass for production of large mirrors, and large panes of glass for windows in the Baroque houses and palace's. These sheets were blown by specialists - so-called sheet blowers, who worked there from the beginning of the 18th century. The remainder of the sheets of glass were used for specialised manufacture - painting on glass, which was carried out mainly at homes. The technology consisted in painting of different motives on a pane of sheet glass.

First of all a stencil was placed under the glass, by which the painter drew strong black contours. The sections were then filled in with colour. At the end the painting was covered with dark background or painted over with silver colour, the glass picture was framed and the art work was finished. The actual style of painting was very simple, it relied on copying of old pictures or pre-printed pictures, it had an effect of a mirrored image (from the view of the spectator), especially on the older ones, it happened that the writing was reversed, or the saint is holding his attribute in the opposite hand to normal. The majority of glass pictures presented different types of Saints (the most popular one was St. Florian, protector against fire), very often other religious motives and secular motives were quite exceptional. Pictures painted in Pohoří, are characteristic of bright coloured robes with emphasis on yellow, which gave the impression of gold. People purchased these pictures on pilgrimages, fairs and markets, 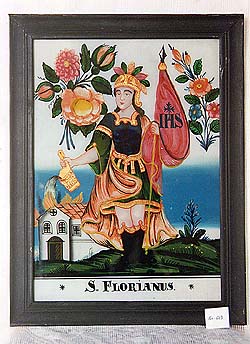 from the local tradesmen, and displayed them in their rooms in corners above the table. Sometimes during the 19th century, they placed them in double rows. The glass pictures started to go out of favour in the second half of the 19th century, and were replaced by prints.

In the companies set up by Jan Mayer (Pavlína, Stříbrné Hutě, and Bonaventura) at the beginning modern Classical glass with diamond cut was produced.

The glass works in Černé Údolí produced crystal glass, and normal cut chalk and green glass before the year 1881. The pane glass and other smaller quantity of glass were exported to the centre of Bohemia and Austria. A bigger and newer glass works, which were later built, started to produce more specialised glass panes in 1884, coloured and white, antique glass, hyalite stone glass (glass of special strength, glance and impermeable to light, it resembled more a precious stone than glass). The decoration of this type of glass was increased by gilding and cutting. Beside to the original black hyalite, they also melted a hyalite that was red and marbled. The products were exported under the trade mark of Schwarzthaler Glas into Austria, Hungary, Germany, Switzerland, Russia, America and India. They were awarded on exhibitions in Paris in 1855, in České Budějovice in 1884, in Praha 1891, and Chicago 1893.

The melting of glass and improving of the hyalite glass was also the work of Jiříkovo Údolí and Stříbrné Hutě glass works. This glass, which reigned in the period of Biedermeier, was invented in 1816 under the directions of dr. Jiří František August Buquoy - a mathematician, chemist, philosopher, and economist, in the glass works in Jiříkovo Údolí. In the Stříbrné Hutě glass works in the middle of the 19th century the production of ruby glass, which was exported as far as the harbour towns of the North and Baltic seas, was renewed. In the second half of the 19th century, a shadow came over the glass works, and gradually the glass works closed down, this lasted till the first third of the 20th century. The main reason for the closures of the glass works was the reduction of timber supplies and the copying of hyalitic glass by a cheaper imitations and the competition from big glass factories.