Castle and Monastery of Kuklov 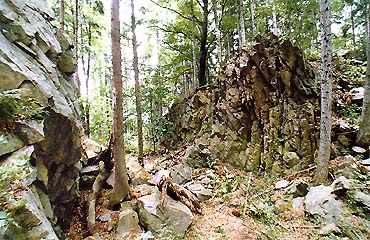 Location:
The castle and monastery of Kuklov is located about 3 km to the north of Brloh.

Origin of the Name:
The name Kuklov (the German name is Kugleweid) is probably derived from the Latin word cuculla (hood, helmet) and from the German word Weid (pasture). Literally we can talk about hooded pasture.

Description of the Place:
The ruins of the castle from the 14th century are located on a rocky forest hill and consist of the remains of the walls and moat that is quarried into rock. Near the castle ruins of a monastery of the Paulians from the 15th century and the first half of the 16th century are also situated. Also preserved there were the circumference walls of a one nave Late Gothic church with five-sided presbytery with two rests on the south side. The remains of the church buildings are preserved only in the walls of the houses that were founded later around the monastery ruins. 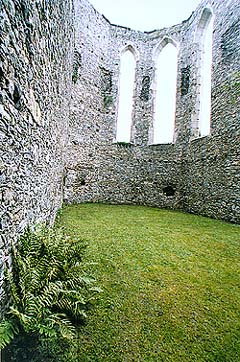 The castle founded in the 14th century had a two-part character with the centre on a rocky hill and with a wide barbican in the shape of a rectangle. In 1395 Kuklov castle was taken by force by the Rosenbergs and it was destroyed. Since then the castle has been abandoned. Near the castle ruins, the Paulians´ monastery was established in 1495. The construction of the Late Gothic monastery was drawn out until the middle of the 16th century and it has never been finished. In the surrounding of the unfinished and unoccupied buildings new houses were built step-by-step, the owners of which used the remains of the monastery as a source of building material. Some of the houses were directly built on the place of the former monastery. This fact significantly influenced the character of the whole village.

History of the Monastery's Residents:
The founder of the Kuklov castle was probably bishop Jetřich Mindenský who was famous for his work in Bohemia around 1357. When he died, the castle was passed over to the king's property. Later Kuklov castle became the reason for one of many disputes between king Václav IV and the Praha archbishop Jan z Jenštejna. Their conflict had an economical background that was provoked by the Kuklov burgrave Václav ze Švamberka. At the time of the conspiracy of the Czech aristocracy against Václav IV the royal castle of Kuklov was taken by force by Henrich III. von Rosenberg in 1395 and ruined. When the dispute was settled Václav IV gave the Kuklov castle to the above mentioned Henrich III. von Rosenberg who did not reconstruct it. Near Kuklov ruins a monastery of hermits of the religious order of Saint Francis from Paula was established in 1495. The friars were called to Kuklov by Peter IV. von Rosenberg and his brother Ulrich von Rosenberg. The Paulians began the construction of their monastery and in the 16th century they also added a brewery and a farm yard. Nevertheless the monastery has never been finished and as time went by it was left and ruined. During the Thirty Years´ War the castle probably abandoned was ruined by the Swedish army. 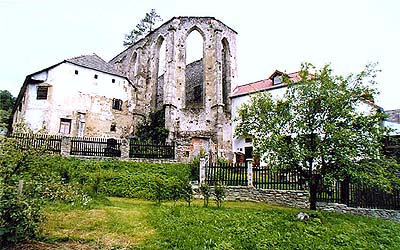 Tales and legends:
When the Swedish soldiers came to the Kuklov castle they killed a number of monks and the rest of friars who did not have enough time to escape using an underground passage were captured and hanged up on a big lime tree in front of the monastery. One of the rescued monks, a devoted monk Erazim, settled in the deep forest called Blanský les (Blanský forest) after this tragedy. He built himself a hermitage on a glade and lived there only with the company of a domesticated hind deer. Very soon he became in demand as a spiritual adviser for many people from surrounding villages. But in winter he was killed by wild animals. People buried the pieces of his body beside his hermitage. Since then this place has been called The Black Man's to remember the devoted hermit who was called black because of the colour of his order's habits. 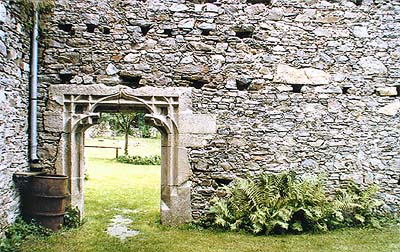 Present use:
Today in the neighbourhood of the monastery ruins there are houses. The remains of the castle as well as the monastery are open to the public.