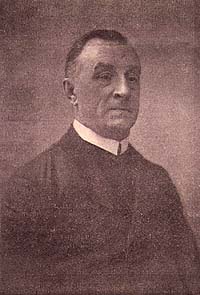 Franitšek Schmidt was born 5 January, 1863 in Rožmitál in the Šumava mountains. He studied on the German secondary school in Český Krumlov and after his A-levels in 1883 entered the Vyšší Brod monastery. Four years later he took a religious vow, adopted the religious name Valentin and was consecrated a priest. Until October 1889 he served as a chaplain in Horní Dvořiště and Hořice na Šumavě, then he studied on the German university in Prague where he graduated in 1894 with a doctorate of philosophy. Almost all the rest of his life he alternatively taught on the secondary schools in Austria and Bohemia. From September 1926 till his death he worked as a archivist of the Vyšší Brod monastery. As a chaplain on the Cistercian vicarage in Hořice na Šumavě he became acquainted with the idea of the Passion plays and is credited with their popularisation. In 1908 - 1910 he published an extensive two-volume historical work referring to Český Krumlov (Urkundenbuch von Krummau). He was interested in the history of the settlement of the Šumava region, the trade routes, and the history of religion and economy.