Description of the Building:
One-storey lateral oblong building with a facade from around 1800, with pilaster strips, belt cordons and ribbon-shaped stucco decorations. Between the windows of the first floor there is a picture of the virgin Mary Budějovická (the protector) with St. Florián and Jan Nepomucký. Along the rear facade, which is on the ground floor, and apparently on the first floor town walls, is located a corridor. The roof is covered with shingles and tiles.

Architectural and Historical Development:
The building was created in the late Gothic style before 1512. The first report about it is from 1523. In 1730 the house was a ruin. The present building was built immediately after that, using the left older part of the first building (stronger walls and different type of vaults). Around 1800 an adaptation took place. 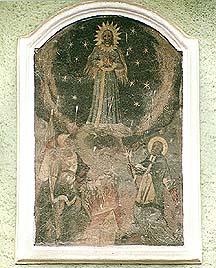 Significant Architectural Features:
There are few vaulted rooms in the building. In one room on the first floor there is a cavernous plaster mirror. The facade is especially valuable.

History of the House Residents:
In the first third of the 16th century the house belonged to a currier named Hansel. He resided there until 1519. In 1540 the house was occupied by a furrier, Martin, who was replaced five years later by a butcher, Bartoš. Around the middle of the 16th century, the house belonged to the Hřebenář family from Hřeben. After the brother Burghard died, the house was inherited by Jan Markvart and Vaněk (Václav). In 1555 a butcher, Tomáš Trogar became the owner of the house, and just before the middle of the 1560`s the house was occupied by another butcher, Tomáš Čech. From 1565 - 1584 a blacksmith, Havel Kandler, resided there, and in 1596 a butcher, Bartoloměj Landsknecht, lived there. At the beginning of the 17th century the house was occupied by a blacksmith, Vít Eyban, from Soběslav. In 1607 the house belonged to a hatter, Štěpán Havel. We do not know much about the owners in the 17th and the first half of the 18th centuries. It is certain that Matyáš Dorn, who lived here in 1718, didn\'t care much about the house. In 1750 the house was purchased form him for 40 Rhinish golden coins. It was only a ruin. The Dorn family occupied the house until 1764. They were replaced by the Lechner family, who owned the house until 1825. 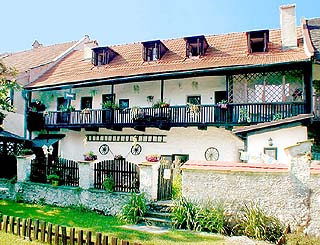 Present Use:
Bed and Breakfast u Vltavy