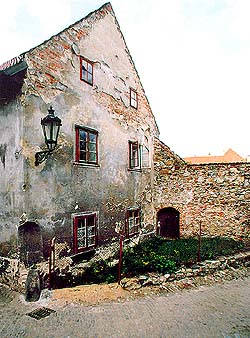 Description of the Building:
Corner two story building with a longitudinal spatial arrangement and a double-pitched roof. The longer side facing the street has three window axis, the shorter side has two, also in the gable and attic. The groin above the footing forms a carrel. The facade is plain, only the second story window has a stucco ribbon-shaped decoration around it.

Architectural and Historical Development:
The house was built in the late Gothic period by attaching it to the outer wall of the monastery. It was modified during Classicism.

Significant Architectural Features:
The decorated window lining and the hall on the ground floor in the left with barrel vaulting with caps.

History of the House Residents:
At the beginning of the sixteenth century, the house was owned by a man named Sýkora, about whom we do not have much information. From the 1540s, Valentin Rosenpergar or Rosenbergar lived in the house. During the 1570s, Jan Mattioli, an herb grower, beekeeper and Rosenberg doctor, moved in. He appears at the court of Wilhelm von Rosenberg for the first time in 1578. The doctor probably borrowed the surname of a famous colleague, the Italian doctor and botanist Pierandreo Mattioli, who served as the personal doctor of the Archduke Ferdinand and the Emperor Maxmilian II. Jan Mattioli died during January of 1591 and was buried in the crypt of the Minorite Monastery in Český Krumlov. Kateřina Mattioli inherited the house, sold it in 1607 but lived there until she died. The new owner, the castle baker Jiří Krompota or Krumpota had to mortgage the house because of debts and his son Petr could return in 1638. Quarry-man Jiří Planzker lived here from 1664 to 1684, followed by cloth-maker Matyáš Pamhauer. Cloth-maker Ignác Planzkr lived in his father\'s house until 1747. After him, many people of many trades lived here.

Present Use:
This residential house is to be renovated soon.