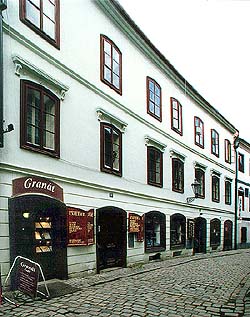 Description of the Building:
This two story structure, with its wide composition, breaks up this block of otherwise, relatively narrow buildings. Two or three original structures were located on this plot of land in the Middle Ages. The building has a complex system of roofing with various orientations. The street side facade with seven axes dates from 1875. All of the openings have got segmented arches. Though the two older structures share a common facade, the interiors and the entranceways of each of the building have remained individual and separate.

Architectural and Historical Development:
Both buildings are originally from the Middle Ages.

Building no. 97: From the Middle Ages, the entrance hall with joisted ceiling, which is covered by a simple encasement is well preserved. From the Renaissance period, the hall on the first floor with its two square, groin vaults is preserved.

Building no. 98: Original Renaissance room with segmented barrel vaults in the back tract of the ground floor.

A second story was added to building no. 97 and no. 98 in the second half of the 19th century.

History of the House Residents:
Building no. 98 :
The oldest known owners of the building were the members of the Stetk family, after whom the building was referred to as "the Stetk´s house" in the first two decades of the 16th century. In 1521, when all of the members of the family had died, Jeron Schifle, the executor of the will of the last surviving member, sold the building to Alexandr Menych. Mentch, who was a member of the town council in the 1520s, sold the building in 1531 to Hans Dinhof. When Dinhof died in 1542, he left the building to his wife Dorota and his children Barbora, Marusa and Ondrej. Ondrej, who also used the name Podlauf, was able to take over the ownership of this building by the second half of the 1540s. When he died in 1576, the building was left in the hands of his widow Alena. She was remarried to Vita Sochor from Prachatic, who sold the building in 1577 to a barber Wolf Eisenfeind. After Wolf´s death in 1583, the building was taken over by the Rosemberg authority. Peter Wok von Rosenberg sold the building in 1594 to his court painter Bartolomej Beranek (or Jelinek), who had lived here even before he officially purchased the building. Bartolomej´s most significant work was the painting of the (castle tower in Cesky Krumlov) but he also did work on the castle in Bechyne. When he died in 1618, his widow Marta continued to live in the building. From 1626, Jan Nic, the caretaker of the Eggenberg lordship in Orlik and Zvikov, lived here. He was replaced in 1644 by a town clerk named Jan Adam Puffer. The next owner of the building was adjunct bookkeeper for the prince Tomas Schwarz. From 1711, a hat maker jan Anderson lived here and he was succeeded in 1735 by another hat maker, Joseph Frantisek Neumuller. Members of his clan lived here until the mid-19th century. From 1848, the building belonged to Leopold Sklenar, who connected this building to building no. 97 in 1875.

No. 97 :
A man named Jiri was the earliest owner of this building. After him the building belonged to a brewer named Masek in 1501. He died in 1521 and one year later the building was sold by Masek´s son Slyvestr to a brewer named Ambroz, who was also known as "the fat brewer". After his death, his wife and three children stayed in the building for a short time. In 1543, when the sons were all on their own, Ambroz´s widow sold the building to a cobbler named Mates, who moved into this building from Latran. When Mates died sometime at the end of the 1550s, his widow Dorota continued to live here until 1571 when she sold the building to a cobbler named Florian Ranner. In 1596 Florian´s wife Mariana died. A year later, Florian was remarried to Vorsila, the widow of Filip Nuss, and he moved into her home no. 54 Kajovska. He sold his own building in 1598 to a barber named Ludvik Pfeiffer, who was originally from Svabska and who previously lived on Latran. Ludvik died in 1617 and the widow Dorota lived in the building until 1624, when she was succeeded as owner by painter Jiri Sporeigl. In 1633 a tailor or linen dealer named Ondrej Schultz moved into the building and he was replaced as owner by a weaver named Lorenc Baurnschmidt in 1650. From 1693, the building belonged to the lord mayor Aldabert Langer and in 1740 to a saddler named Pavel Hochendorffer. Another saddler, Augustin Geble lived here from 1796 and his family inhabited the building up until the year 1840, when the building was acquired by Leopold Sklenar. In 1875 this building was connected to its adjacent building, no. 98.

Stories And Other Interesting Information:
The building was once inhabited by a wealthy citizen who forbid his daughter to marry the young lad with whom she was in love. He chose for his daughter a wealthy man and insisted that she marry him. After the wedding, which was held in the building, the newlyweds left on a trip to Ceske Budejovice, where the groom was originally from. On the way from Mirkovice, however, something unfortunate happened. No one knew exactly what happened, only the post master, who brought the mail to Krumlov and who found the overturned carriage with the bride, the groom and the driver dead. That very same night, the father of the bride had a terrible dream in which his daughter rebuked him for insisting that she marry.