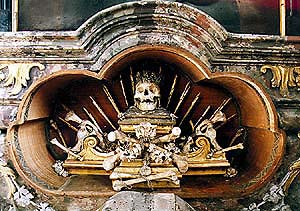 The veneration of sacred relics in Český Krumlov acquired great importance in the second half of the 14th century under the influence of the personal example of the Roman Emperor and Czech King Charles IV. In Prague at that time, sacred relics were shown together with imperial jewels in the Body of Christ Chapel. The Rosenbergs were very ambitious and tried to equal the ruling family residence; at that time they introduced the worship of sacred relics even in their town. The festival was held every year in the Minorites and Clare Nuns Convent Church in Český Krumlov; the Church was consecrated to the Body of Christ and to the Annunciation of our Lady (see ( Minorite Monastery in Český Krumlov). The Rosenbergs as founders of the Convent (in 1350) had a close relationship to it. The sacred relics donated by Charles IV, Ludwig I, the Patriarch of Aquileia, the Archbishop of Prague etc. were set into reliquaries and deposited in the St. George Chapel at the Český Krumlov Castle (see Remains of St. Calixtus in St. George Chapel) and some in the Cistercian Monastery that the Rosenbergs founded in 1258 as their family vault.

Before 1379, the procession of Corpus Christi Day and the Relics Procession was postponed till the octave of the Corpus Christi Day (it means on the eight day after the feast day; great holidays are celebrated in the Catholic Church for eight days) because of dissention with the parish clergy whose procession of Corpus Christi was shadowed by the Minorite Festival. The meaning of the Festival of Relic Showing increased towards the end of the 14th century when the Rosenbergs obtained plenty of indulgences for it. 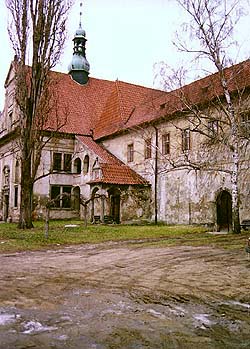 In the obituary of the Minorites from Český Krumlov we find instructions for organizing the Festival; they are not complete but they are of a high declarative value. They are valuable also for being probably the only direct document of a musical production in Český Krumlov towards the end of the 14th century (see History of Music in Český Krumlov). The Festival was held in the following way: on the octave of the Corpus Christi Day, the procession arranged in the Convent Church with the chanting of hymns, and was heading towards the parochial St. Vitus Church. In the front there were people scattering grass and flowers, after them were four monks with the reliquary, then other participants with the relics monstrance, next the acolytes with bells, then the Abbot of Vyšší Brod with the Holiest Sacrament under a silken canopy of heaven carried by four men with the figures of the Evangelists. The Abbot was surrounded by clergy, and people followed them. The procession was accompanied by singing and instrumental music played by "pueri"; they were probably pupils of the Latin School of Český Krumlov. After the return from the parochial church, the Abbot of Vyšší Brod showed the sacred relics in four monstrances at the Graveyard of the Monastery. One priest announced them first in Czech, then in German. After bestowing indulgencies, clergy and some people took part in a glorious sung eucharist. The others listened to sermons in German in the courtyard of the Monastery, or they were in the cloister and in the Graveyard, where they could also listen to preaching. After the mass, all the guests were invited for a feast in the Castle. After eating, there was a sermon about the Body of Christ in the Monastery Church. During the whole day, a lot of priests heard people's confessions.

The Festival of Relics Showing was held for the last time in 1417. At the insistence of Ulrich II von Rosenberg who tended towards the Hussite movement, parish priests from the Rosenberg patronage had to convert to Utraquism, and many of them were expelled from their parishes. After his return to Catholicism, Ulrich put the relics in hock to have some means for financing his fight against the Hussites. The relics were brought back in the 1450's and 60's, but the magnificent relics processions were never renewed.