Founding the Town Park:
The area of the former Jesuit garden was already included in the town property in around 1900, meaning that it was already accessible for the public. Even though it lacked an intentional garden form, it filled the role of informal Town Park. A playground was founded between the river swimming pool and the chapel. The Town Park was founded later in 1907, thanks to the efforts of the mayor Frank Khemeter. The project was probably processed by the municipal planning bureau. We do not know the author of the project but it was most likely the municipal surveyor Karl Nowaczek.

The positions of municipal gardener and watchman were established. The newly founded park was ceremonially opened on 16th June 1907. The former cemetery ground was added to the original area of the Jesuit garden. The south-eastern part of the park was designated especially for sports. The Town Park, thus founded in 1907, began to function as a town park shortly afterwards The style composition of the park as a whole or individual details is typical for the turn of the 19th and 20th centuries. The global appearance is based on the principles of the English natural-landscape park. This especially concerns the arrangement of the tree groups in the central part contrasting with the large size of the central grassfield, tracing of the paths in gentle curves and informal (non-axial) applications of architectural dominants either inside the park (the former Jesuit residence) or in the areas outside the park (silhouette of St. Vitus church). The style of historicism, fashionable in that period, is evident by the usage of regular alleys and forms of orchard details of the garden design. In the long run, using principles of landscape park at the beginning of the 20th century is historic as well - this style culminated in Bohemia at the end of the first half of the 19th century. Interconnection of both of the above-mentioned styles of garden architecture with its memorial function - celebrating important individuals of the social life - is typical for the turn of 19th and 20th centuries. In the Town park of Český Krumlov this was achieved by the construction of the F.L. Jahn' monument and the memorial to the First World War Victims. In addition, a specific feature of this park includes sport-relaxation function as part of the park's composition. 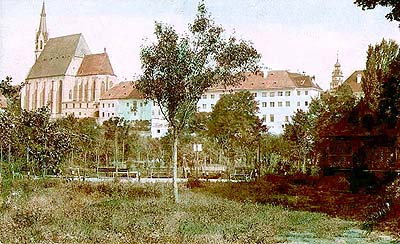 Further development of the Town park garden design:
It must have been in 1924 - 30 that the park composition was changed. A public soup-kitchen with a resting place for tuberculous patients was built next to St. Martin's chapel. A wooden pavillion was constructed near the Jahn monument and later even the path road network was changed. The path system was supplemented with a central axis path which completed the inside path circuit. With the opening of the First World War Victims memorial in 1930, the Town Park functioned not only as relaxing and aesthetic centre but also as a place of respect and strong nationalism. In 1945 both monuments were destroyed as an action of spontaneous revenge against the former German-speaking population. The post-war period did not present any significant changes in the appearance of the Town Park. New trees were planted more or less in keeping with the existing space composition. A significant change came only with the placement of the memorial known as "Victory and Fight Against Fascism" into the central part of the park at the end of eighties. The park and pavillion were already registered as historic monuments at that time. In spite of the resistance of the conservationists the memorial was completed in 1989 (!). The sculptural element itself functions decidedly as a new dominant of the central part of the park. The path system was also significantly changed. The original path circuit system, designed with smooth curves, was destroyed. The celebration ceremonies at the memorial required a simple operational solution. There were two new blacktop paths laid to serve the memorial. The operational solution and tracing of the paths was strongly schematic. There were two blacktop accessing paths to serve the memorial, which deny the original compositional intention of the park designer with their traces. Part of the short circuit before building no. 55 (Hotel Gold) was liquidated with the intention to stress the new accessing path from Linecká street, which penetrates the park insensitively with its direct line ended by the memorial dominant. The newly built path to the north of no. 55 led the walk of delegacies and guests out from the memorial where it joined the original park path system.

Compositional scheme of the town park:
The composition of the Town park of Český Krumlov is significantly conditioned by its gradual expansion into the present area. Nowadays three different types of parts are visible:

The area of the original St. Martin cemetery on the uphill side to the south of the park is currently almost totally covered with trees. Tall red oaks, probably planted while founding the park, have a dominant appearance here. Ash-trees of the same size were perhaps of a foreign origin - probably as a result of the deteriorated park maintenance during the First World War and post-war years. The area was confined by further desification of tree planting (mainly coniferous) after the Second World War and especially between 1970 and 1980. The area of the former Jesuit garden in the original river lea is totally flat and features comparatively large open grassfields with groups of trees. The original system of sand paths based on two circuits was liquidated with the construction of the "Victory and Fight against Fascism" memorial (see above). Existing blacktop paths are insensitively traced, moreover they do not offer originally intended views of architectural dominants either inside the park area (Jesuit residence) or outside the park (St. Vitus's church, Cross hill chapel).

Today the most attractive scenery is in the aged yew-tree yew, offering a view of the silhouette of St. Vitus church. The garden composition of this part of the park has been, since its beginning, based on a contrast of deciduous trees with coloured leaves and coniferous trees. This comparatively hard contrast is exceptionally impressive from long-distance views from the surrounding hills and it creates one of the main features of the Town Park. 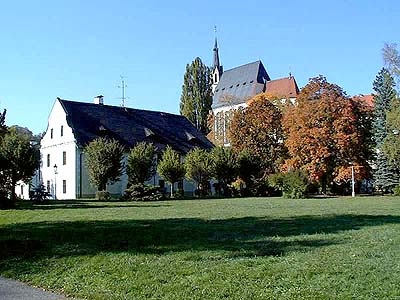 The central large grass area with groups of mainly coniferous trees is circumscribed by a line-alley of maples from the north. The opposite side of the Vltava curve is edged with scenery of full-grown-trees cover. Originally it consisted of red-leaf maple alley only (planted shortly after founding the park). Today there is an uninterrupted strip of mostly foreign trees (lindens, ash, willows, etc.) growing outside the alley right along the bank.

Sport grounds have been located in the south-eastern part since the beginning of the park's development. Today there is a playground used by both elementary school in Linecká street and park visitors. The running track (oval) and landing pit show lack of maintenance. The playground itself also should be reconstructed in the future. It is advisable to consider founding a grass playground - a far more suitable for the park area than the existing playground (!) Tree vegetation in this part of the park consists of a column-shape oak alley along the original wall in the south and a strip of trees along the Vltava River (mainly oaks, maples and limes).