Fountain on the Square in Český Krumlov

The first mention of the water run on the square in Český Krumlov appeared in fire rescue and police regulations compiled by Johann von Rosenberg in April 1388 and determined for the burghers. A record from 1443 says that since the water tank was made of wood, Ulrich von Rosenberg had to reprove the burghers for the bad condition of both piping and tank: "...and as written in municipal books, they led water to make it till the feast of St. George (April 24th), and at that time a good log cabin was erected under pillory where it had been ordered to stand, and a good trough would stand in front so the horses would drink from it.

The first public fountain made of stone appeared in the 16th century. It happened at the end of the 1570's when a new reservoir replaced the old one. A record from "Biographies of Last Rosenbergs" by Václav Březan states: "1577. This year an erection of the public fountain started on the square in Český Krumlov at municipal expense". Water was led out from a municipal pond at Upper Gate and then went through piping located on Upper (Horní) street.

Besides the fountain, there were so-called halters standing on the square from the 16th century which were actually tanks with running water retaining live fish. The halters were here until the end of the 17th century.

The 16th century fountain stood there until 1844. It looked much simpler than today. Its ground was multiangled (probably octagonal). A simple stony little column with water running out through four pipes stand in its center. The column was decorated by a pyramid on top. In 1843, the poor condition of the fountain caused it to be discontinued, and a new one was planned to be built at the Plague Column on the upper side of the square. The Townhall paid 1643 ducats for the rebuilding carried out by a stonedresser Josef Hauber from Plešivec. The fountain has retained its original shape up to now. 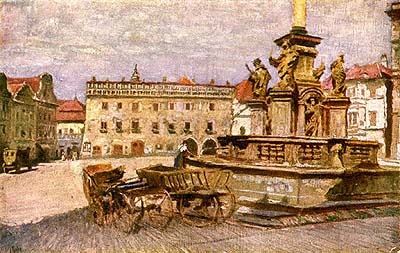 A stone six-angled fountain surrounds a Plague Column erected during 1714-1716 for the memory of the plague epidemic that struck the town during 1680-1682. Sculptural decoration shows mainly sculptures of anti-plague patrons (saints) and town protectors. Sculptures of St. Václav, St. Vitus, St. John the Evangelist, St. Juda Thaddeus in the upper row, and St. Francis Xavier, St. Sebastian, St. Kajetan and St. Rocchus in the lower row are the masterpieces of a Prague sculptor Matěj Václav Jäckel, as well as a sculpture of Virgin Mary situated on top of the column. (see History of Sculpture in the Český Krumlov Region). 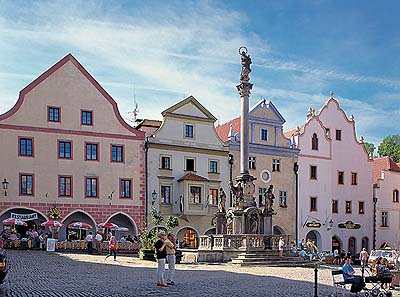