The manorial or "castle pond" mentioned in 1453 preceded the garden. Its embankment extended from the house Latrán no. 78 to the north of today's Budějovická gate (built between 1598 and 1602). Although the pond no longer exists, the embankment body has been preserved under the houses between the gate and post office building. Along with its function as a part of the fortifications of the time, the pond served as a drinking water source for the inhabitants of Latrán. Its water was led to Weigermühl mill in front of Budějovická gate by means of a mill-race. 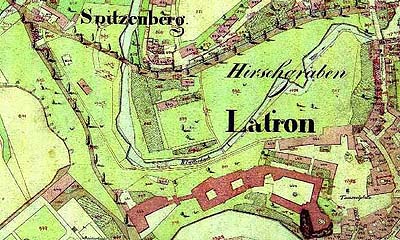 The change in the appearance of the castle's north forefield was brought by the constructional activities of Petr Vok of Rosenberg between 1593 and 1600. During this short period of time the following constructions were raised: "island garden", game-park, pheasantry, gem grindery, sawmill for exotic wood and one unusually large construction on the territory of the 5th castle courtyard (V. courtyard of Český Krumlov castle), constructed by Domenico Benedetto Cometta of Eckthurn. The palace (known today as the Renaissance House) faced the garden slope with its north-western facade with six extra large niches. Moreover the inside concave area was divided by two shallow conches. In 1597 the entry was made: "The game park is created around the pond and grassfields". The castle pond and part of the surrounding lots were walled probably with the intention of breeding game. In 1593 - 1598 a garden with lusthauz was founded on an island in the centre of the pond. A main garden area - 75 by 75m square - was created by forming an artificial island in the middle of the castle pond. The summerhouse was probably located in the garden centre, and the garden was surrounded by a wall. Wall galleries allowed for strolls while observing the summerhouse garden interior. The terrain configuration of Český Krumlov castle allowed a visual connection between the garden and the north facade of the castle, where the last Rosenberg palace was located in the place of today's Mirror Hall. The palace offered a magnificent view of the underlying garden. A flood in 1598 seriously damaged the garden. "On 17th (of August) Monday, after the Assumption of the Virgin, at Krumlov, great water in the pond under the castle came from great rains, and great damages were caused". The roughly square shape of the garden has been documented even on later Deer Garden plans, when the original Renaissance design had already disappeared. The shape appears as a line of allotment of the Deer Garden area. Even today, one can see break lines probably defining the periphery of the original Renaissance "island garden" in the north-eastern and south-eastern side of the parking lot. In 1600 the existence of the game-park, new gem grindery and the exotic wood sawmill was documented. These buildings, as well as a mentioned pheasantry, were situated in the north forefield of the castle - i.e. somewhere within the premises of today's Deer Garden.

Vok's ambitious architectural programme was probably a reaction to the foundation of the Royal game-park by Rudolf II. For the purpose of comparison we should mentioned that Rudolf's game-park included an observation summerhouse, pheasantry, a Roman circus-type menagerie built at the pond shore, and an artificial circular island in the centre of the pond. 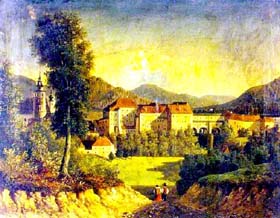 The area north of the castle residence was significantly changed in the beginning of the Thirty Years War. Right in its beginning (in 1618) the castle pond was drained out.

During the Baroque reconstruction of the castle carried out by Jacob de Maggi after 1682, the Deer Hall decorated by deer trophies and stuffed bears was created by modifying the original Rosenberg Green Room. It is an iconographically interesting example analogous to the main pattern of the room furnishings in connection with the neighbouring game-park. (The Deer Hall was reconstructed into today's Masquerade Hall) in 1747 - 1748). The local name Jelení (Deer) Garden was documented for the first time in the 18th century (Hirschen Garten, Hirschgraben, Hirschgarten in German) and it illustrates the original garden functioning as a game-park. An oil painting by G. A. Hörner (dated back to approx. 1750) documents that the area of the former Renaissance garden was still surrounded with a wall at that time. The inside grass area was probably planted with fruit trees without an obvious geometrical plan. The entire area of the Deer Garden was also walled in that period. The eastern part of the garden was predominantly covered with grass, mixed only with several groups of shore-vegetation along the Chvalšinský stream crossed by a footbridge. A hayloft and a barn were located in the western part of the garden under today's so-called Dlouhá zeď (Long wall).

A map dated back to 1792 provides a highly valuable information source on the appearance not only of the court garden of the time (today's castle garden) and premise of Kvítkův Dvůr (called then "Favoritenhof") but also on the built-up area in the valley lea of the Chvalšinský stream. In 1792 engineer Jan Nepomuk Šimoušek, using a survey dated back to 1785, made a geometrical scheme of the extent of dominical land belonging to Český Krumlov castle and to Kvítkův Dvůr, which has been confirmed by Engineer Josef Rosenauer. (SOA Třeboň, Český Krumlov branch, Velkostatek Český Krumlov, map I A D N.1.) The Deer Garden is encompassed by a complex of castle buildings from the south, by a developed area at Latrán street (in the embankment of the former pond) from the west, and from the north, along the princely road, by a wall leading from Budějovická gate bridgehead (marked in the map as "Stadt Prager Thor") all the way to the end of the wall leading to the castle, and which borders the Deer Garden in the west. A two-pillar gate ("Hirschgarten Thor") is marked near the building of the former tollhouse where the road leaves the area of the Deer Garden. The north pillar is a part of the corner section of today's building no. 109. The Deer Garden is illustrated as a mostly open area with no vegetation - the vegetation is concentrated especially on the castle slopes and along the stream banks. A large saltpeter building was located in the square area of the former Renaissance "island garden" (so far bounded by slopes in all sides like an island). It was a single-room wooden building on a ground plan, approximately 50 by 70 meters wide with hip roof with six parallel ridges. A footbridge across the stream used as a connection with the I. castle courtyard led from the south-eastern saltpeter corner. The plan also shows a fallow-deer shelter and an old seed unshelling house on the right bank of the stream. The spring, now called "little lion", is noted on the plan as "Hirschgarten Brunnen". There are farmhouses and allotment gardens, barns and haylofts situated along the wall in the north-west garden corner. The plan shows a millrace and uninterrupted garden strip belonging to the castle's farmstead behind the new princely road (built in 1763). 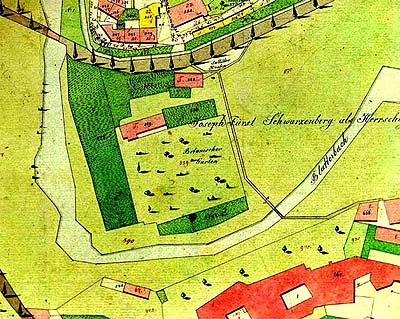 After the foundation of the Schwarzenberg economic institute in 1800 an experimental garden (botanical garden) for student practical lessons was founded in the Deer Garden. It was located in the area of today's parking lot. In this way, the Deer Garden gradually changed its nature into a place of manufacture production and school lot for agricultural education. For instance the interest in improving potato quality and broadening the range of grown species led to experimental growing of new potato varieties in the local botanical garden in the 1930's (see beginning of potato farming in the Český Krumlov region).

In 1826 Josef Langweil drew a map of Český Krumlov town in which we can also see the castle garden and other manorial lands and buildings (coloured). (The state regional archive (SOA) in Třeboň, Český Krumlov branch, Velkostatek Český Krumlov, the map hangs in the research room (badatelna)). There are the gardens of Schwarzenberg economic institute with a service building drawn in the place of the large saltpeter house known already from the 1792 map. 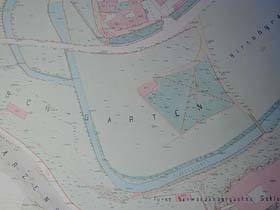 The botanical garden (approximately on the area of long disappeared "island garden") was located south of the service building. The design of the garden founded on a ground plan with dimensions 75 by 60 meters was influenced by the trendy natural-landscape style. The central grassfield is surrounded by freely shaped tree groups creating scenery separating the interior of the botanical garden from the surroundings. Paths designed in curves and curvatures create two walking circuits. In the opposite corner against the institute building there is a circular space made in garden cabinet style. Utility gardens were adjoined to the "ornamental" botanical garden from south, west and north. The new saltpeter house and heap are located near the princely road.

The day 14th June 1848 brought a radical change into the garden's development. Heavy rains and floods destroyed the garden, enclosure wall and damaged the bridge at Budějovická gate. All fallow-deers then being bred in the game park died. Two years later the Schwarzenberg economic institute was closed down. These circumstances led to the end of the game-park and botanical garden. In its place a free park design in natural-landscape style gradually emerged and in its north-western corner a new seed unshelling house (today's Jelenka restaurant) was built. The style development of the garden was thus completed by these changes. Around 1930 the eastern part of the garden along the former pond bank was stated to be leased as allotment gardens to the employees of the Schwarzenberg forestry. Today's appearance of the Deer Garden has little to show from the rich past of this part of Český Krumlov and Český Krumlov castle. The garden was part of the castle during the whole of its history until the expropriation of the 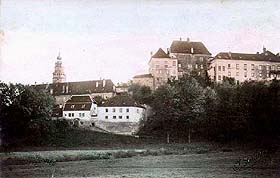 Schwarzenberg princes' property in 1947, and was firmly connected with the castle due to its function. Since the beginning of the fifties, after the breaking of this bond, the fate of the garden went downhill. The park design of the area was gradually damaged by building a concrete swimming pool, a fire-brigade tank and later by constructing a bus station including a waiting hall. In 1974 a place in the garden was chosen for building the "Liberation commemoration" monument, even though this was built in the town park at the end of the eighties. Construction activities in the territory of the garden proceeded with building a gas station and a large parking lot for visitors of Český Krumlov in the beginning of the nineties. Despite careful maintenance of the surrounding green areas, the newly built parking lot can not be considered as the next development phase of garden design, but rather as a newly assigned function which destroyed the integrity of the garden and interrupted its development.