Hardly any of the cities in South Bohemia have been as gifted with so many valuable historical organs as has Český Krumlov. A number of outstanding sacred places belonging to the very jewels of the Baroque and Gothic eras are being filled with the sound of such instruments.

During the Renaissance, the Rosenberg court provided musical personalities with a rich and abundant artistic environment. In those days, there were two organs placed in the St. Vitus Church in Český Krumlov. Nothing has remained, however, except numerous archive records from the work of Tomáš Grevish who was the most important organ maker in Český Krumlov during the Renaissance period in the 16th - 17th century. 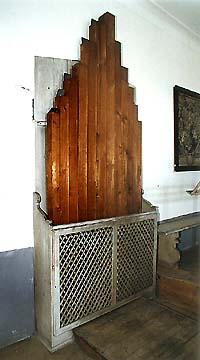 The oldest instrument preserved in its very original condition is undoubtedly the one made by Nicolaus Christeindl and Bernhard Wollers from České Budějovice, which is hidden behind the main alter in the monastery chapel of Virgin Mary and Corpus Christi at Latrán ( Minorite Monastery in Český Krumlov). This double-keyboard instrument with 22 stops comes from 1679 - 82; individuality of the voices shows the last repercussions of the Renaissance period, even though the typical Renaissance stops are missing and the discreet pedal casting belongs rather to a mature South German Baroque organ pattern.

In this region, influences of Upper Austria and Passau organ workshops have always been mixed with local ones. The outstanding organ placed on the gallery above the entrance into the St. Vitus church as a choir instrument shows the evidence of such influences. An unknown organist coming supposedly from Egedacher´s organ workshop in Passau finished it in 1716 - at least the architectonic and graphic elements used for the organ's housing may suggest so. It used to stand in St. Jošt Church in Český Krumlov which is closed these days, and, thanks to the enlightened decision of the Town Councellors in the times of Emperor Joseph's reforms, was transferred to its present place. As opposed to the previously mentioned instruments, the housing surface is decorated in accordance with Baroque patterns with several shades of marble, and its carving acanthus decoration is polished white. As a whole we get an impressive artwork amplified by a superior vertical, sideways line which places both keyboard machines into one and only housing up to one another, which is another unusual element in South-Bohemian organ making. By means of sound conception and soft intonation, the organ reflects certain Italian-like influences which are perceptible in Austrian organ making as well -- i.e. at disposal of a Piffara outvibrating stop within the main body. All those instruments have been either restored or recently preserved by expert restorers - Vladimír Šlajch from Borovany and Dušan Doubek from Jihlava.

A small portable organ preserved in the Castle collections from the 18th century comes from Caspar Neumann's workshop in Mirovice. Similar instruments used to be a current part of the Baroque gallery equipment and were utilized in particular during pilgrimage processions. There are only a few of them preserved in various conditions up to now within the region of Český Krumlov. Nowadays, this organ is a part of the No. 1 Guided Tour of Český Krumlov Castle.

A prolific workshop of Pantoček from Dačice penetrated the region in the second third of 18th century, although there is nothing left of its work throughout the region. There is an archive picture only from the beginning of the 19th century showing their supposedly biggest instrument standing on top of the main loaf in St. Vitus church in Český Krumlov.

Then a Semrad organ workshop from Sedlec won recognition here in the second half of 18th century. The best of Fridrich Ferdinand Semrád's work is represented by a five-stop organ from 1750 placed on the loaf of St. George's Chapel at the Castle. Its sound top culminates in a sharp mixture of thirds which is so much typical for most of his artworks. The instrument's peculiarity is in a possibility to involve all the principal choir stops at one time just by means of an ingenious connection of keyboards levers, and a utilization of refracted octave with divided semitone G sharp and F sharp keys.

The 19th century saw the organ workshop of Frantz Jentschke and then Franz Jüstel who maintained the classical organ-making tradition until the end of the 1860's. Nevertheless, except for the organ in Černice, other instruments coming from this workshop have been preserved mainly outside the region of Český Krumlov. As for so-called organ romanticism, there is a huge three-keyboard organ by Heinrich Schiffner with a pneumatic set of 47 stops made at the beginning of our century and placed in St. Vitus Church in Český Krumlov. This instrument belongs to historical music relics of the past.

Many of these instruments are used nowadays for various organ concerts performed during the summer season. An annual informal event called Organum Hydraulicum (Water Organ) organized by the organ player Michal Novenko presents an untraditional introduction to a number of historical organ instruments. Starting in Vyšší Brod and ending at Zlatá Koruna Monastery, the participants canoe down the Vltava river and visit churches that have some historical organs. Each day is crowned with a stylish organ concert in one of the churches along Vltava river. And in this way some of the almost forgotten instruments are becoming revitalized.