The existence of a very interesting pedagogic activity - Zlatá Koruna School is connected with the last abbot of the Zlatá Koruna Monastery - Bohumír Bylanský, who in the year 1772 set up here, a so-called Elementary School, which followed the didactic teaching of Jan Amos Komenský. The teaching was conducted in the mother tongue (Czech), and a great emphasis was placed on the conception of teaching. 69 educational picture boards were made for the use within the school, including maps, portraits of famous people in science, culture, art, philosophy, theology etc. These educational aids are today stored in the depository of the State castle of Český Krumlov.

These educational aids expressed the world around according to the work of Komenský "Orbis Pictus" ("World in Pictures"). The pictures are completed with text in four languages, Latin, German, French and Italian.

The School cabinets were supplied with collections of botanical folders, animal and mineral specimens, microscopes and magnets, which were used to perform actual experiments in physics. A part of the curriculum was formed by acting small theatrical plays, which the pupils practised during the school period. An emphasis was placed on not only theoretical part of education, but also to obtain practical experience in different types of trades, fruit farming, agriculture, wine growing, bee-keeping, farming, processing of flax and other household work - like cooking, washing, weaving, sowing and knitting. A speciality was the breading of silkworms. Besides reading, writing and arithmetic, a great emphasis was placed on obtaining and getting accustomed to work experience. These tasks are pictured as individual scenes on these educational aids. 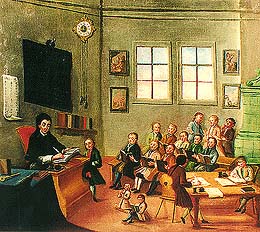 The boys were taught by Matyáš Prosil and the girls were taught by Marie Konvičková. The school was abolished together with the monastery in the year 1787, following the decree of emperor Josef II from 1785. A similar industrial school was operating in Kaplice under the leadership of Ferdinand Kinderman. (School in Kaplice)