The extinct communities and settlements in the region of Vyšší Brod

In the beginning of the 20th century there had been 116 places of the permanent settlement in the district of Vyšší Brod. In the end of the 20th century the number changed from 116 places to 27 places. It means that 89 communities and settlements became extinct during the century. It was caused by three main reasons: closing the frontier "The Communist Iron Curtain", constructing man-made Lipno Lake and agriculture collectivization. The articles "The extinct Parish of Kapličky" and "The extinct Parish of Rychnůvek" give us the information about the extinct communities and settlements situated on the right Vltava river-site caused by the Communist Iron Curtain. 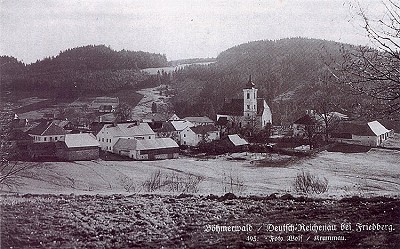 In the year 1946 German speaking inhabitants were being shifted aside on the basis of the Postupim Agreement of the winning countries - the USSR, the USA and Great Britain. Almost all inhabitants had to be shifted aside from the region of Vyšší Brod. The Czech minority had to leave the region of Vyšší Brod in the year 1938 because the region had been connected to the Reich. After the Germans had been shifted aside, the new settlers came gradually. They were mostly from Romania and Slovakia. They were promised to get the deserted buildings, farms and land. In the year 1947 and afterwards there never were enough new settlers to occupy all the buildings and land. When some of them had moved in, they took the roofs into parts, stripped down the floors, windows, doors and moved them to inland where they were used as the building material again. 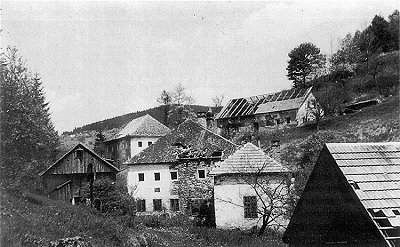 After "The Triumphal February" in 1948 the Communists forgot about making over the land to the new settlers during the year 1946 and 1947, and the forced agriculture collectivization began even in the border-land of the Vyšší Brod region. Some of the settlers moved away and the rest of them tried to make their living as the privately-lived farmers until the fifties. They did not want to give up the land and houses which they had gained.However, their children were leaving the farms gradually, especially for the paper-mill in Loučovice. The extinguishment of the communities and settlements situated on the left Vltava river-site in the region of Vyšší Brod started in the beginning of the fifties. The settled immigrants got too old that they were not able to farm on their farms any longer. The extensive work of construction was particularly started in Vyšší Brod. Most of the farmers moved in there. The new work of construction was also started near the farms. For example, the farm of Kyselov caused the definite extinguishment of the settlements of Bolechy, Hradoví, Lopatná and Kleštín. The deserted buildings and farms fell into disrepair and finally were demolished.