In the dark medieval times, the thick border forest reached far inland. Through these forests trade paths were cut out, which enabled the exchange of trade between Bohemia and the Alpine countries. 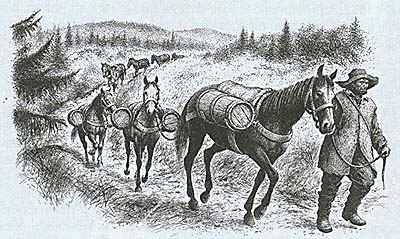 Some of the historians say that the long distance trade falls into the Bronze Age period. In Hallstatt and the surrounding area the mining of the salt deposits started and in the region of the Alps copper-ore was found, which was then processed. The subject of the exchange trade during the Bronze Age was from the southern side - salt and copper - which was transported in round wooden containers "hřivny". From the north, they traded with pewter from the Krušné mountains, Baltic amber, furs and possibly gold. Metallurgical products were bronze as luxurious weapons (daggers), decorative needles, axes and chisels were transported in both directions.

During the Hallstatt-Lateen period other luxurious products from the Mediterranean were imported as well as salt and wine.

From our country we mostly exported iron products, silver and gold from the Šumava gold fields, also wheat, graphite ceramics and others.

During the Roman and Slavonic period, the import broadened by some food stuff, also by decorative and household ceramics and fabrics. Salt remained the most important article of import. Apart from the traditional export items, the export included horses, cattle, furs, skins and also slaves.

Under the word "route" it is necessary to imagine a narrow path, which was prepared for tradesmen with donkeys, not very passable, in muddy sections cut timber, so-called bridge piles, were laid down, they were apparently so narrow and impassable, that it was only possible to have two horses abreast; a journey by coach was out of the question. The path was barricaded against unwelcome visitors by tree trunks.

Several trade paths led through the region of Český Krumlov. We will stop at one of them - the path called Cáhlovská, sometimes also Kaplická, which became the axis of all business life in Kaplice. In the old documentation it is called "Antiqua Via Versus Bohemiam Directa" and it is said, that it already existed in the prehistoric period in the direction from the Celtic settlement Lentia (Linz), on the Dunaj river in the direction of Cáhlov (Freistadt) and Kaplice to the inland of Bohemia. In the vicinity of the path probably during the Hallstatt period, an occupied settlement was built on the top near Blansko, which also was used by the Slavs. 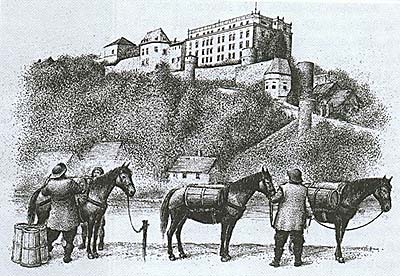 More information about the existence of the path during the prehistoric period can only be supplied be a detailed archaeological investigation here in our country as well as in Austria. This research is already taking place on all three branches of Zlatá Stezka (the Golden Path - Prachatice, Vimperk, Kašperské hory).

The original path always led along the passable bank of the Malše river - and where the thick forest reached right to the water's edge, and the river was not passable on either side, the path went through the water bed.

During the 9th and 10th centuries, the countryside was populated by the Slavonic tribe of the Dúdlebs , they occupied the settlement in Doudleby (Kosmas mentions them in the year 981). During the oldest times, the path came out from the boundary forest behind Kaplice and nearby Rozpoutě (which is marked by a cross roads) it divided into two. Northwards it led towards the fortress of Doudleby and northwest towards the fortress of Netolice. Nearby meeting of the Malše river with the Černá river, a Marian chapel (today's so-called Český kostel sv. Floriána - Czech church of St. Florian) and a customs house were built on a rise during the Romanesque period. Only later the parish church was built. This place is known to have the oldest settlement , to which later on a market settlement was added, that was established in the 13 century. The joining of these two settlements became the base to a small town which lies on the cross roads of these paths

B. Benetka, a former regional archivist in Kaplice, thought, that apart from the church buildings and the customs house, there was also a watch tower in this area. He based this finding on the analogy of development of settlements on trading paths, where a small fortress or a castle stood in the customs area. He mentions two cases. In Frymburk where a market settlement was set up by the customs office, which was by the ford across the Vltava river. Above the ford stood a tall watch tower (before the war one of the streets in Frymburk was called Thurmgasse) and on the headland a settlement was established. In Trhové Sviny, on a low headland near the parish church, a chapel of Sv. Jana Křtitele (St. John the Baptist) stood until 1828, it was in the forefront of the boundary castle, with this and the customs house it formed a complete unit. This was the place that was first settled. Was there a castle in Kaplice or not? This can only be answered by an archaeological research into the locality.

I believe that the whole area of the two churches and the customs building was surrounded by a wooden stockade fencing or a stone wall. The original path turned from the Malše river westwards towards the above mentioned customs office, this is also confirmed by the bending of the road today. A substantial change was brought after 1265, when the Czech king Přemysl Otakar II established the town of České Budějovice. The settlement in Doudleby lost its importance, and the newly established town became the administration and business centre. The king started to build a new road in the direction of Linz to his Austrian estates, which were brought to him by marriage. In the opposite direction, a road was being built from the Austrian side.

The notes mention this path as a road, on which merchants could travel in wagons. The route was not supposed to be only a narrow footpath, over which, as in the old times, goods would be transported simply on the backs of peddlers or on donkeys . The new road was supposed to be used not only for the purpose of transport, but also for the military- strategic interests, so that the king with his army, in an emergency, could get to his Austrian estates as fast as possible. The road led in the same direction as the E 55 today.

In the north of Linz, on the edge of the Šumava forests, there was a village during the 11th century, this village was called Zaglau. Its original name was kept in the Czech language in the form of Cáhlov. On the place where Zaglau was, a new town was established in 1277 by the name of Freistadt. The meaning of this name was, that the town was free, it was freed from taxes and had a special purpose. It was to become a stop-over town for the transport of salt and other goods to Bohemia, a place which would provide accommodation for the travelers, a market place and a place with storage facilities. Freistadt quickly took a position of importance on the trade route which could be compared with the position of Prachatice. Traders gathered into the warehouses of Freistadt over several 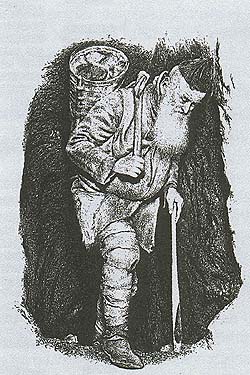 routes, from which the whole west side of Šumava, the basin of Budějovice and the region of Nové Hrady were supplied with salt. The customs house was moved from Kaplice all the way to the border, to Dolní Dvořiště, which was mentioned for the first time in 1279. The town of Kaplice suffered greatly by this change, but on the other hand it made up by its advantageous position, in the middle of the route, between the town of Freistadt and České Budějovice. Carters traveled about 30 km a day. In the local taverns they found shelter from unfriendly weather, they could rest here, have some food and drink and if necessary accommodation. Even the horses were looked after, they were given fodder and oats. Tradesmen traveled on the road with cattle from Bohemia and Austria, and actually established the well known cattle markets in Kaplice. The road did not go around the town as it does today, but led directly through the center.

Along the route so far un-populated areas were settled. From the inland direction, there was continual colonization by the Czechs and the following settlements were established: Zbraslav, Suchdol, Všemeřice, Nažidla, Pšenice, Zdíky, Skoronice and Strádov. During the 13th century the Little Castle of Louzek, Sokolčí Castle, Little Castle of Pořešín and Velešín Castle were established.

What products were imported and exported during the Middle Ages? Salt was the commodity that was most imported, then Styrian gold, expensive cloth, silk, wine, sea fish, tropical fruit, foreign spices and weapons. Different types of wheat were exported, malt, hops, beer, fresh water fish, butter, wax, honey and other agricultural products and also hand made products.

The route was not only a trade path, but was also part of the postage link between Praha and Venice. The first mention of a mail stop in Kaplice is from 1530. The connection was maintained by messengers, who owned horses. People who had suitable premises for this type of business, and a sufficient number of horses became post masters. Post master Schober, became well known in Kaplice and his family carried on this tradition of several generations.

In the middle of the 16th century, the Czech king, later emperor Ferdinand I, ordered the import of Gmunden salt.

The government office in Praha gave an order in 1550, to the magistrate of Kaplice, Wolfgang Scheplack, to repair and renovate this route, which became a trade road, to be able to take horse drawn wagons, that imported salt into Bohemia. The road was supposed to be finished as soon as possible. The magistrate Scheplack almost had this road ready in June 1551 - the road had two arched bridges, and could be commissioned to full use within 3 to 4 months. The magistrate unfortunately faced a disaster. A great fire raging through Kaplice took all his possessions , so he had no money to pay the workers. Because the necessary funds were not forthcoming, he knew he would not be able to finish the work. His situation was even more complicated, because he was carrying out other building work (maintenance and alterations) for the estates of Nové Hrady, where he was also waiting for payment of 500 golden coins, so that he could pay off his 150 workers - as well as 30 more, that he was waiting for after an agreement in Gmunden. How it finished with the magistrate and his workers we unfortunately do not know. 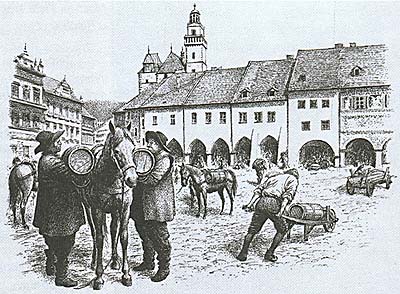 The salt was transported in casks, which was then a unit of tax and also customs duty. For the Czechs, the size of a cask was 144 pounds (74 kg). The cask for the donkey trader was 107 pounds (55 kg). Large casks were transported on special wagons designed for this work, they were actually at the same time a type of a unit. The wagon was loaded with 12 casks of salt, which meant 888 kg - and it depended on where the wagon went and how strong its horses were.

The frequency with which salt was transported was varied during the historical period. In the second half of the 16th century, there were approximately 28,000 large casks transported over this road, per year. Up to the year 1620 it was 70,000 casks per year. The Thirty Years' War reduced the import to minimum. After a certain revival in the 18th century the transport stabilized in the 19th century, so that the road between Mauthausen, Freistadt, Kaplice and České Budějovice had a constant movement of 400 carrier wagons, which imported salt into Bohemia. The transport of salt by road came to a halt after the introduction of the horse-drawn railway from Linz to České Budějovice on August 1, 1832. The route of the railway led almost in the same direction as the salt route. Salt became transported only by railway - and the carriers had the change their goods for others, but that is another chapter.