Coats-of-arms in the Český Krumlov Region 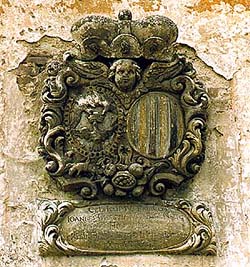 The ownership of a coat-of-arms was one of the privileges of the aristocratic families, the emblem gave them a prestigious standing in society. Apart from the prominent aristocratic families in the Český Krumlov region, like the Rosenbergs, Eggenbergs, Schwarzenbergs or the Buquoy families, we can come across coats-of-arms belonging to lower class of aristocrats. They were found in architectural details of buildings, tombstones etc. The emblems of the lower class of aristocrats are usually very different, they show mostly motives of animals, figures and objects or their parts.

Častolár family from Dlouhá Ves
The Častolár family originally came from the south-west region of Bohemia. In the 16th century they received the Fortified Settlement of Chlum and Little Castle of Křemže.
Emblem : The coat-of-arms sign of the family was a disc which represented a hand protector on the lower part of a lance 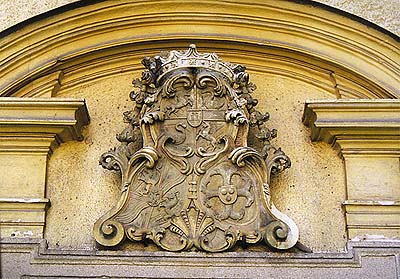 Aldermen of Pořešín
The origin of the family and its coat-of-arms is derived from the Bavor family from Strakonice. Little Castle of Pořešín belonged to the family estates. The aldermen of the Pořešín family were in service of the Rosenberg family or participated in religious activities. The family died out in year 1473.
Emblem : The coat-of-arms sign was again an arrow.

Rous family from Čeminy
The members of this family mainly acted in the services of the Rosenberg family. They were the donors of works of art, for example from the workshop of the Master from Zátoň, from where the Votiv Altar from Přední Výtoň came. It was made at the beginning of the 15th century. On the picture we see a coat-of-arms, which possibly belonged to Jan Rous z Čemin.
Emblem : The coat-of-arms sign was a part of a wooden wheel.