Places of Pilgrimage in the Český Krumlov Region 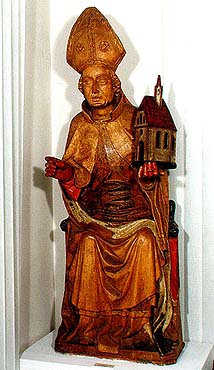 In the region of Český Krumlov we can find nearly ten places of pilgrimage, some of these are visited up to today, and some have been forgotten. The tradition of pilgrimages in the region of Český Krumlov is long and its beginning falls to the medieval times. The oldest and the most famous pilgrimage place is the Kájov Pilgrimage Church situated not far from Český Krumlov. This church belonged to the Cistercian Zlatá Koruna Monastery. The Kájov Marian cult did not die out during the Hussite period thanks to its position on the estates of the Catholic Rosenberg family and in the second half of the 15th century this pilgrimage place went through a great revival. The church was extravagantly rebuilt in the Late Gothic style, and the building was decorated with a new statue of Holy Mary with little Jesus Christ, which the pilgrims took as miraculous. During this period, in the nearby forests of Kájov, there was a pilgrimage to a boulder, with assumed imprints of the feet and thighs of St. Wolfang, a bishop from Regensburg from the 10th century, who was supposedly walking through this country. The Church condemned these pilgrimages as superstitious and gave the explanation, that the imprints have been made by the roots of a pine tree.

In the 16th century the attendance of people to pilgrimages diminished in Bohemia mainly because of the reforms, which did not allow belief in heavenly statutes and pictures. The popularity of Kájov was maintained to a certain degree even to this date, because in this region the majority of the population was Catholic. The biggest growth in the pilgrimage processions happened in the Baroque period. The special blessed places have already been popular from the beginning of Christianity, but in the 17th and 18th century, blessed pilgrimages became one of the typical expressions of Baroque religion. Thanks to this, the plain countryside became in the eyes of the believers a countryside of miracles, blessed places and healing waters. It is not possible to forget the influence of the Thirty Years' War, which led to a great shake up of the basic beliefs of life. The source of comfort in this unsettled period became God, to whom, through the means of Holy Mary and Saints, one could turn to with trust. The organisation of pilgrimages and other magnificent church celebrations was another form of unforced teaching and spreading the Catholic beliefs to wide number of people, which was the only allowed form of religion after the battle of Bílá Hora (1620). 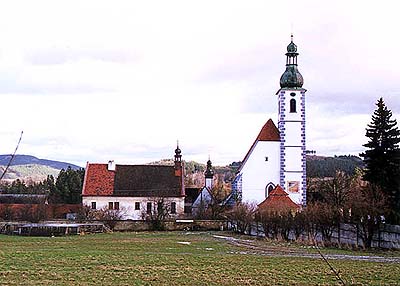 The region of Český Krumlov represented traditionally a Catholic region, therefore the reintroduction of Catholic beliefs went through smoothly and quickly. The majority of the pilgrimage places originates back to the Baroque period. Here also, as in all Bohemia, the Marian cult was at the forefront. The Mother of God was honoured as an advocate and a wonder-worker, who can help the believer even during the most difficult situations in life. The centre of the Marian belief was still the town of Kájov, where magnificent Baroque celebration pilgrimages took place, with the attendance of duke Johann Christian I. von Eggenberg, and members of his court, the Abbot from Zlatá Koruna, the Prelate from Český Krumlov, and members of the religious brotherhoods from Český Krumlov and hundreds of believers. The pilgrimage place was covered with many votive gifts, which were given to Holy Mary by the grateful pilgrims from Kájov in order to thank for her listening to their requests. Amongst the gifts magnificent cloaks were found for the statue, jewellery, liturgical utensils and vestments, lights, candles, painted pictures and other gifts in the form of silver, gold or waxed parts of human body, which were very often miraculously healed. A path led from Český Krumlov to the pilgrimage place, which was lined with granite pillars that carried illustrations of individual mysteries of the rosary, which were painted on tin. The pilgrims here said the prayers of the rosary.

The second large pilgrimage place was the Svatý Kámen Pilgrimage Church near Rychnov nad Malší. On the initiative 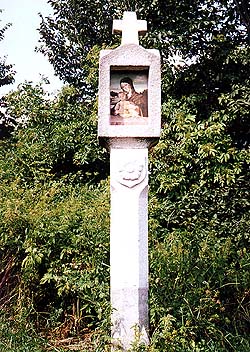 of the Clare nuns from Český Krumlov, the building of a pilgrimage church of Panny Marie Snežné (the Virgin Mary of Snow) was built on a place, where a legend says that the Mother of God with little Jesus appeared on a bolder, accompanied by singing angels.

In the region of Český Krumlov many small pilgrimage places existed with local significance. It meant pilgrimage chapels which in majority of cases were sacred to Panna Marie Bolestná (Holy Mary of Sorrows), whose cult was widely spread in this area. A chapel with this patron, which surrounded by an arcade, was established in 1709 on Křížová hora (the Mountain of the Cross) which is the name of the hill above Český Krumlov (Chapel on the Mountain of the Cross in Český Krumlov). Other chapels of Panna Maria Bolestná grew in Studenec near Rožmberk nad Vltavou, near Horní Planá and on the top of Dobrá Voda, also on the hill of Randlesberg near the town of Hořice na Šumavě. The pilgrims came to the chapel of Narození Panny Marie (the Birth of Holy Mary) in Svéráz, which can be found in the graveyard next to the parish church. The original Gothic chapel was at the end of the 17th century partially rebuilt in the Baroque style. The believers did not only visit pilgrimage churches and chapels. They also came to ordinary parish churches, if there was a saying that a certain statue or a picture can create miracles. If these miracle stories did not repeat then the pilgrimages ceased. This was also the case of the statue of St. Ondřej in the parish church in Brloh. 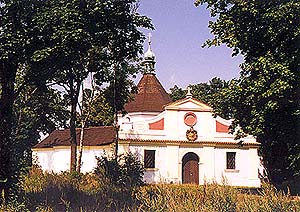 by which the pilgrim prepared himself for the visit to the sacred ground. The pilgrims visited the sacred places by themselves or in processions, which were organised by the parish or local brethren. The ritual of the visit to the sacred place was formed of the acceptance of the sacrament (confession and acceptance) and a prayer in front of a merciful statue or picture. At the end purchases were made of articles in the form of holy pictures, rosary etc., which were sold on the pilgrimages. The pilgrimage represented a change from the everyday duties and responsibilities, and the possibility of deepening one's religious belief, even the possibility of meeting new people. The era of Baroque pilgrimage was ended by the enlightening reforms of emperor Josef II in the second half of the 18th century, who thought that pilgrimages were useless and meaningless and took people away from work.

The pilgrimages again returned but without their Baroque prestige. In the 19th century two new places of pilgrimage were established in the region of Český Krumlov, the pilgrimage chapel of Panna Marie (Holy Mary) near Malšín, which was built by the local parishioners in 1856 in conjunction with the dogmatic announcement of Immaculate Conception of Holy Mary and a big chapel of Panny Marie Sněžné (Holy Mary of Snow) near Vyšší Brod, which was called Maria Rast. In 1887 a group of boys built a small chapel from stones on a place, where around the 15th century Holy Mary with little Jesus appeared. 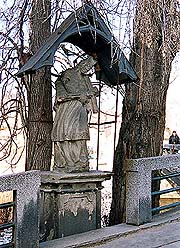 But she was chased away by rude songs of the boys who were nearby grazing animals. The building of this chapel was supposed to pacify this event. Later on the abbot from Vyšší Brod built a large Pseudo-Romanesque chapel, which is visited by many pilgrims to this date.

Great tragedy in the region of Český Krumlov occurred after the evacuation of German population after the second world war, and the onset of communist rule, with its negative approach to religion. Many of these sacred places and building deteriorated without regular maintenance, some were deliberately devastated for example Svatý Kámen, some were totally demolished, like the chapel of Panny Marie Bolestné (Holy Mary of Sorrows) near Hořice na Šumavě. First after 1989 the majority of pilgrimage places awaited the needed renovation, very often under the support of the original settlers from Austria and Germany. At the present time, Kájov, Svatý Kámen, and Maria Rast are among the most frequently visited pilgrimage places, where regular pilgrimages take place with participation of Czech, Austrian and German pilgrims. 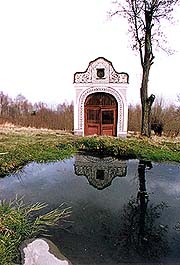