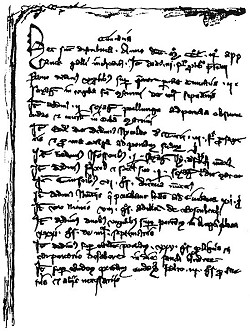 Latin proverb says: "Claustrum sines aremarie est guasi castrum sines armamentarie", which in liberal translation entails "monastery without library is like a castle without armoury". Base of today's magnificent library in the Cistercian monastery in Vyšší Brod was a small library, which brought from Wilhering in the year 1259 first 12 monks. The books were then placed in an apartment of abbot. There is preserved the list of 77 books, which were Vyšší Brod cloister from the year 1259. Step by step were obtained another manuscripts as gifts, by purchase or cribbing. So today's 205 greaseproof manuscripts make rarely integrated set, which evidences, that construction of a monasterial library was systematic and goal-seeking.

From the whole collection the oldest are four greaseproof "Leaves of St. Pavel". It is a fragment from 8th century. Every leaf has proportions 15x12 cm and on parchments are minuskules with red majuskules. Latin word miniskule means small letter and majuskule stands for the capital one. Another three handwritten books come from 11th century. Most considerable is "Psalterium". This psalm-book containing the psalms of an Old Testament, has 142 pages and on the penultimate one is written a year 1018. Single pages have a size 18x14 cm and the psalm-book was into Vyšší Brod brought from motherly cloister in Wilhering in the year 1259. The second book "Dialogi Gregorii" was written 1081 - 1082 by Evín (Jan). The third book from 11th century is the "Antifonary".

The book from Vyšší Brod monasterial library "Commentarius biblicus super Lucan et Joanen" was written around the year 1200 in France. It obtains 179 leafs of parchment in proportion 34x24 cm and it is written by French minuscule on west-European unglazed parchment. Decoration of book is entirely graphical. The painter (illuminator) mastering the miniatures, used oriental strands. Cechner presented in the year 1921, that this book was into Vyšší Brod brought from Wilhering, but according to my opinion it is unlikely, because there was no French book before 1259 in Wilheringu. I rather think, that this book was bought in the year 1292 at returning from general chapter house in Citeaux, when "the king Václav II. gave to Cistercian monks for book buying "200 silver batches". Another two handwritten codices come from the first half of 13th century and were probably produced in the same workshop or at least illustrated by the same painter. These are "Martyrologium cisterciense" and "Regula s. Benedicti". Both books are written by Central-romance minuscule from 13th century and decoration belongs to south-German and alpine areas. In "Regule s. Benedicti" both figures of Benedictine monks wear the off-white vestures, what means, that the book was written for Cistercian order. 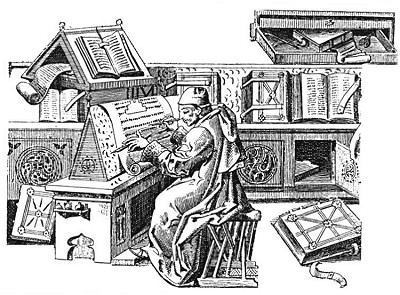 It is remarkable, that there is no copy of the whole Bible, thus of the Old and New Testament, in the oldest catalogue of library. It was an absence, which was repaired in the year 1300 by the abbot Otto II. Vyšší Brod cloister had not had then its own "scriptorium", thus writing room, so the abbot turned to cloister in St. Florian near Linz. Scriptorium in St. Florian was then producing "giant Bibles", which have the same stylistic and material characters in monasterial libraries in alpine countries. Set of five big Bibles, which is called "Biblia Latina", has a catalogue No. 17 and 1288 broadsheets. Every side of parchment has dimension 49x34 cm and they are written in central-European Gothic characters. At the beginning of first part is by hand written in 14th century the inscription Monasterii Altovadensis, what reliably means, that Bible belonged to Vyšší Brod Cistercian cloister. From this Bible was read during different devotional acts in regular or chapter choir, sometimes in refectory during common food.