History of the Paper Mill in Loučovice 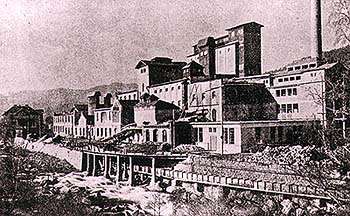 With the financial help of his mother Anna Poráková-Faltisová, Arnošt Porák from Trutnov asked Ing. František Karel from Vyšší Brod to draw up and prepare plans during 1884-85, and finally started to build a new factory to produce cellulose in Loučovice. At the same time he also built nine new residential houses, because previously the village was occupied only by a few woodcutters. He also made an order for the supply of new machinery. He was then able to start production in the factory in 1886, where three boilers were already commissioned for the manufacture of sulphite pulp. In 1888 the production was not sufficient for the demand, therefore two new boilers were built, the boiler-house and other parts of the factory were also extended. The first machine for the production of paper was built in 1895 and two further in the following years, including some ancillary machinery. There were five more houses built in the village and also a school with two classes. The fourth machine for paper production was put into operation in 1900, and at the same time a decision was reached to open another factory in the nearby Svatý Prokop, which was commissioned in May 1903. This factory had a power station, pulp mill and equipment for production of tar paper. It also included a machine with a circular sieve for cardboard production, which was first of its kind in Bohemia, and a machine for automaticly taking-off of the paper. At that time the transportation was questionable, up to then it was carried out by horse-drawn carriages on a road which had a rough surface, over a distance of approximately twenty kilometres from the nearest railway station in Cártle (today Rybník). The owner of the factory was therefore trying to build a railway. He managed that in a co-operation with the abbot of the Vyšší Brod monastery, Bruno Pammera. The building started in 1909 and on December 2, 1911 the second oldest railway in Bohemia from Cártle (Rybník) - Vyšší Brod - Lipenský Zdvih (Lipno nad Vltavou) was put into operation with celebrations (Electric Railway Rybník - Lipno). In the same year in January (1911) the private company became a share-holding company, and decisions to build a company power station at Lipno and a saw mill, were made. Two years later the factory was again modernised and the number of paper machines was increased to six.

Heavy floods in 1920, demolished bridges, weirs and factory buildings, and a great fire in the following year ruined the machine room and slowed down the favourable development of the company. The renovation and modernisation of the plant took place, and after the death of the founder Arnošt Porák, the plant came under the management of his son, Eugen Porák. In 1929 and 1930 two new machines replaced the old style ones, and "Vltavský paper mill" contained four boilers for sulphite pulp, the pulp mill and five machines for paper manufacture. The steam saw mill, which belonged to the plant was also extended and contained two frame-saws with other wood-working accessories. The company power stations in Lipno, in Svatý Prokop and in Loučovice supplied by the means of ten turbines the power of 3,650 kW and this output was supported by back-pressure steam turbines with the output of 2,300 kW. The economical crisis slowed the investment, and it was not until 1939 that a new modern spinning and wrapping machine for thicker paper was built, which significantly increased production. At the same time the company changes from a share-holding to a limited partnership. In 1945 the whole plant, under the jurisdiction of president Beneš, was confiscated and run by the state.