The Church of St. Nicholas in Rožmberk nad Vltavou 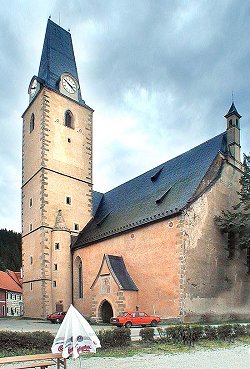 There is tha Parish Church of Rožmberk mentioned as the Church of The Virgin Mary in Cechners´s List of Cultural Monuments. However, the statement is erroneous. According to the parish memory book there was a blebescity already in 1150. It might have been the wooden chapel or the church which belonged to the parish in Zátoň. The first written document about the church in Rožmberk dating from 1277 gives details of Bishop John who consigned the local church to Vok of Rožmberk´s wife. In 1279 Henry of Rožmberk conveyed the parish keeping keeping to the Cistercian Monastery in Vyšší Brod.

The present-day church was mostly built in the second half of the 15th century. In 1465 Sigmund Pirchar concecrated the Altar, and the Nave was vaulted over in 1480. The church was vaulted over again in 1488. It is very probable that the Nave was vaulted. According to the Memorandum of the Vyšší Brod Monastery, the church vault in Rožmberk was finished in 1583. It is seen on the vault above the presbytery where two diffrent styles are recognisable. The feet were laid in the end of the 15th century and the vault placed on the feet appears the late Gothic style features which were used in the countryside late in the 16th century, The Parish Church in Rožmberk was kept by the priest in both kinds from the Hussite period to the period of forced Recatholicization as well as the most Czech churches. In 1664 the church was concecrated again by Bishop George Windschuhen of Vyšší Brod. At that time there was the Altar and four site altars: The Virgin Mary´s, St. Wencesla´s, St. Štěpán´s and St. Linhart´s. In 1762 the Altar was replaced with the new one. In 1881 the whole church was rough-worked and most of the original stone marks were destroyed.

In 1893 a new organ was installed and in 1900 the lateral Baroque altars were replaced with the altars in the Gothic-style. There is a sizeable tower with the spiral staircase between the north presbytery side and the east church wall. Both lateral entrances have a hall as well as the presbytery where there is an entrance to the oratory. The whole building except the outbuilding to the oratory is laid on the rectangular cross bar with the cut upper corner. 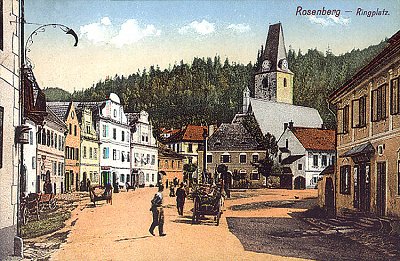 At the height of 320 cm above the cross bar is the strip moulding. There is the fresco painting - The Death of The Virgin Mary (340 cm x 180 cm) between two piers in the south presbytery side under the strip moulding. It originates from the 17th century and there was the Schreiners´crypt. The presbytery walls are supported with six props. The tower puts up on the square ground plan (790 cm x 790 cm) up to the height of the moulding (30,5 m above the ground). It is the three-floor tower (45,5 m high) and there are dormer windows with the clock face in the middle of each roof site. On the east tower corner there is an inscription W 1413 above the cross bar. The side-face of the south entrance dates from the end of the 13th century. The remainders of the fresco painting - The Crist on the Cross (120 cm x 160 cm) dating from the beginning of the 17th century can be seen in the north entrance hall.

There are four windows with one bar and traceries in the presbytery. One window originates from the 14th century and three late Gothic windows dating from the end of the 15th century. Four windows are in the Nave. One of them has two bars and the rest of them have only one bar. There are many vaults. The size of the presbytery is 900 cm x 14,5 m and its height is 12 m. One of the vaulting foot is decorated with the five-petal rose of The House of Rožmberk.