Mass discoveries (depots of treasure) rank among the most impressive primeval findings. Those are collections of knowingly hidden things. They used to represent considerable possession. They had been hidden for many reasons. For example, due to troubled situations, wars and other dangers, from fear of stealing, etc. Some depots of treasure are thought to have been stores owned by merchants and craftsmen, for example, metal founders. They had never picked up their goods for some reasons. The origin of raw material, trading paths and places of craft workshops are derived according to depots. Some people had hidden their treasure for cult reasons - sacrifice to the Deity god and various ghosts. Several mass discoveries of bronze articles - depots of treasure dating from the Bronze Age - or just their parts were also discovered in the Český Krumlov region. 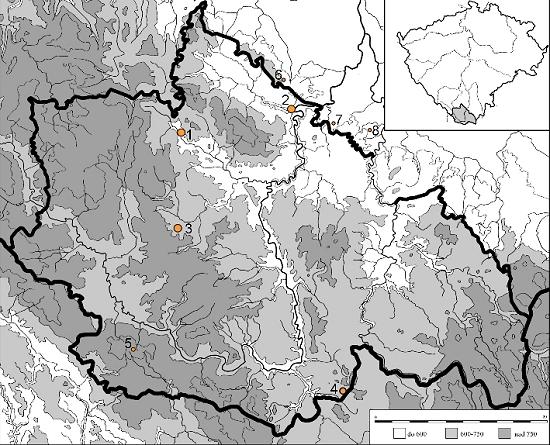 The mass discovery of 165 copper ribs from the late Bronze Age found in Havalda (Hochwald) near Chvalšiny (map No. 1) in 1904 is definitely the largest one. The first rib had been ploughed out by Josef Bürger, an alderman, in his field located approximately 700 metres north-east of Havalda. Other 164 ribs had been found next to the large stone during the digging in the place of discovery. Some of them were lost, but the major part (116 pieces) was bought by the museum of České Budějovice. A couple of them can be seen at the Český Krumlov museum. Massive ribs at the weight of 35 kilograms had represented considerable possession in the late Bronze Age. The place seems to have been a store owned by a wealthy merchant with copper, who transported the valuable raw material from Alps mines to Bohemia. However, he had never picked up his treasure deposited near the way leading to Bohemia.

The bronze prehistoric necklace might have been the remain of another depot of the same age. It was discovered during the construction work of the railway from České Budějovice (Bohemia) to Linz (Austria) close to the Austria borderland in Český Heršlák (map No. 4). In the late Bronze Age several depots had been hidden in the borderland neighbourhood of the Český Krumlov region. For example, a depot of bronze ribs from Slavce (map No. 6) discovered in Matěj Trouba´s quarry at the east foot of Hill Kluk around 1890´s. The two mass discoveries of bronze tools and jewels from Kosov (map No. 7; picture 4 on the right) and Plavnice (map No. 8; picture 4 on the left) near Kamenný Újezd. Bronze articles were excavated in the east of Čekanov pond near Kosov in 1894. There were five prehistoriv necklaces, eight bracelets made of coiled flat wire, nine simple bracelets and a target (picture 4 on the right). The articles were given to the museum of České Budějovice. In the spring 1885 workers found some bronze articles in Hamerský Forest south of Plavnice while they were cutting down aged pine-trees. There were four bronze axes, a bronze chisel, a spiral bracelet and four bronze pins (picture 4 on the left).

The sight of a fortified settlement at the ruin of Dívčí Kámen (Girls´ Stone) dating from the Bronze Age (map No. 2) is a very exceptional primeval locality in the Český Krumlov region. Several mass discoveries from the turn of the late and middle Bronze Age were discovered in the area. The discovery from the year 1960 is the most valuable and interesting - two bronze axes, two bracelets and 250 amber beads deposited in the pottery vessel. Amber jewels had been imported from the Baltic Sea coast to Bohemia. They prove the trade at long-distances. A few spiral bracelets with rose-shaped endings (picture No. 5) had been excavated fourteen years earlier in 1946. We do not know the exact number of them, but there had been at least three bracelets. 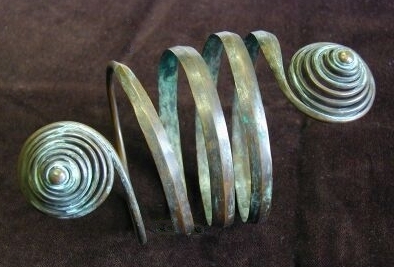 Representatives of the grave-mound culture had buried bronze articles into soil. So far the only mass discovery has been known from the Český Krumlov region. It was discovered by workers while they were digging the soil above farm No. 99 in Hořice na Šumavě in July 1948 (map No. 3; pictures 6-9). There were some fragments (picture 6) - articles broken into pieces - probably a store of raw material. There were some parts of almost twenty articles - six simple bracelets with carved ornaments (picture 9), two flat bracelets with spiral rose-shaped endings and carved ornaments (picture 7), a pin with a sealing head and target head (picture 8), some fragments of two sickles, five fragments of bronze wire and a part of the dagger or sword blade dating from the period BC. At present the articles are deposited at the Český Krumlov Local History and Geography Museum, where can also be seen. The small town of Hořice na Šumavě was built on the place where the thoroughfare had led from Bohemia to the south area called "Podunají" in the Primeval Times. It had also been used by the owner of bronze articles discovered 4,000 years later. 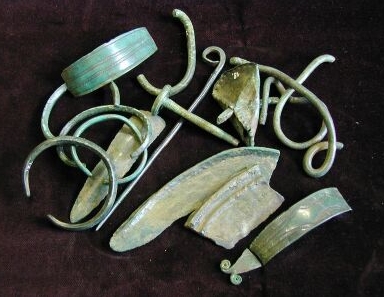 Two swords, discovered in 1883 in front of the entrance into the ruin of Vítkův kámen, had been cast in the middle Bronze Age (map No. 5). The swords may have been deposited there in the Middle Ages - as a sacrifice.