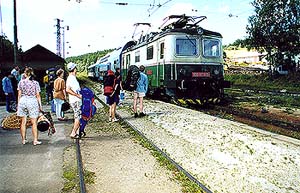 History:
The need to build an electric railway was brought on by the necessity of transporting timber, of which the local forests had sufficient. Timber from long time ago was traditionally transported on rivers, but the Vltava river bed with massive boulders in places under Čertova stěna (Devil's Wall), was not suitable for rafting and floating of logs. The first project for building of an electric railway, which was supposed to overcome this problem, was proposed by Ing. František Křižík in 1893. At that time it was thought unrealistic and was turned down.

The actual building of the railway took place later and the line Rybník - Lipno was opened in December 17, 1911 under the name of "Vyšebrodská electric local line" and became the last local railway built in our country. The shareholders of the company were the prior of the monastery in Vyšší Brod, who worked in the local forests and the owner of the paper mill in Loučovice. The building took nearly a year.

The railway was originally powered by its own power station in Horní Mlýn near Herbertov, which belonged to the monastery. A Francis turbine was installed here, which powered two dynamos with an output of 100 kW and voltage of 1,280 V. If there was not sufficient amount of water in the Vltava river, the work was taken over by a steam engine, which powered a generator with an output of 125 kW. Beside those, there was a compensating accumulator battery with the capacity of 148 Ah prepared in the power station. The power lines were positioned by simple hooks on wooden poles. All the electrical equipment for the railway was provided by the Siemens-Schuckert company. 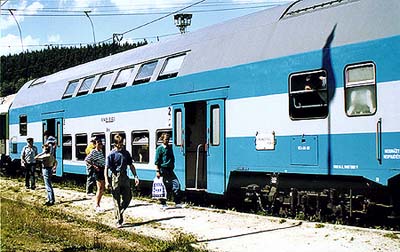 In 1951 up to 1956 the railway was being modernised together with the construction of the Lipno dam. In the section of Loučovice - Lipno, the route was changed, so that today the route finishes on the left bank of the Vltava river. The wooden poles were replaced by steel ones, the feeding system was changed to 1,500 V, and new power supply stations have been set up in Rybník and Vyšší Brod, where a new engine shed was later built.