History of Guilds and Crafts in the Český Krumlov Region

The privileges of the guilds were usually given by the secular authority (the most guild privileges were preserved from the times of the Rosenbergs) but for example the small town of Hořice na Šumavě had been subject to the monastery of Vyšší Brod - since 1612. In the bigger towns with more craftsmen there was usually one guild for every craft. In smaller places existed a guild for related crafts or the craftsmen were accepted to the guilds of bigger towns in the neighbourhood as village masters. The guilds were founded if there were many craftsmen who needed their own organisation and management. In this manner the bakers butchers, shoemakers, tailors, blacksmiths and cartwrights from Dolní Vltavice were originally accepted to the guilds of Horní Planá. 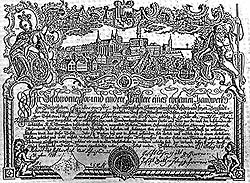 In 1669 Horní Vltavice had gained a title of a small town and the number of craftsmen increased. The above mentioned crafts were granted guild rules at their own request by Johann Christian I. von Eggenberg in 1706. The same privileges were given by the same master to the weavers from Dolní Vltavice, who used to be members of the guild in Český Krumlov. It happened in 1676. The reason for the establishing the new guild was so-called "Mile Law" that limited the activities of the guild of weavers from Český Krumlov to only one mile away from the town. Dolní Vltavice is situated further. The same happened to the bakers and weavers from Horní Dvořiště. They belonged, till the first half of the 18th century to the guilds in Rožmberk nad Vltavou and founded their own guild in 1731. Weavers from Přídolí had belonged to the guild in Český Krumlov until they separated in 1688, sometime the opposite was true. The guild of tanners in Frymburk founded in 1579 couldn't pay the taxes and had to be dissolved in 1738. Because the master tanners didn't want to move elsewhere, they joined the guild in Český Krumlov.

Similarly the formerly independent guild of bakers and millers in Rožmitál na Šumavě after the loss of guild's privileges in the time of war and three big fires in the village had been transferred to the guild in Rožmberk nad Vltavou until becoming independent again in 1697.

In the small towns the following guilds were represented. In food industry - butchers, bakers, millers, in the textile industry - weavers and tailors, followed by shoe makers and inevitably the other important crafts for building and agriculture - cart-wrights, blacksmiths, stone masons, masons, coopers and carpenters. All the guilds tried to solve the problem of the "Mile Law" and to enforce their privileges in the given region and defend themselves from other competition. The favourable geographical position enabled a close co-operation with the craftsmen from Upper Austria. At the same time it created competition and both sides tried to defend their rights. In the 17th century - for example - the potters from Freistadt protested against the participation of potters from Kaplice at their markets. In the first half of the 18th century, the guild of weavers in Dolní Vltavice complained about the Austrian craftsmen who used to come before the regular markets were held in Horní Planá and bought out all the yarn from the villages. In 1672 on the other hand Jindřich from Starhemberk, Upper Austrian authority, supported the request of the clothiers from Kaplice to take part at the pilgrimage markets and fairs in the region of Mühlviertel under the condition, that the Austrian clothiers will be allowed to sell their wares in the Czech kingdom.

The guilds of individual villages in the Region :
The weavers from Dolní Vltavice were members of the guild in Český Krumlov. The guild was however allowed to operate within a one mile limit from the town. Dolní Vltavice is situated three miles away from Český Krumlov. For this reason Johann Christian I. von Eggenberg gave the weavers from Dolní Vltavice their own privileges and rules in 1676. In 1706 he did the same for bakers, butchers, shoemakers, dressmakers, smiths and wheel makers to grant the request of the masters of these crafts. The ground for their request was justified by the fact that the village was promoted to the status of a small town in 1669 and the number of craftsmen who did not have their own guild and were incorporated in the guilds of Horní Planá, had increased. With the exception of weavers, they created one guild for six kinds of crafts. 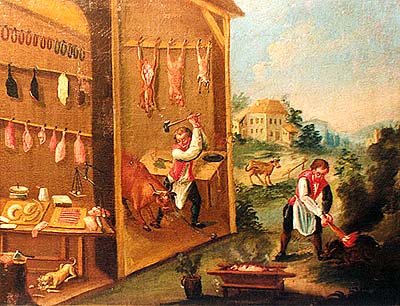 In Frymburk there was a documented guild of tanners in 1579. They couldn't pay their taxes after the general guild rules were announced and because the master did not want to look for work anywhere else, they joined the guild of tanners in Český Krumlov. The documented guilds in Frymburk are weavers (in the year 1587), millers (1521), shoemakers, smiths, cartwrights, butchers and coopers (1785) and the guild of bakers in 1814. Peter Wok von Rosenberg granted the activity both of butchers in Rožmberk by the guild rules in 1597 and also the butcher masters in Frymburk.

The oldest proven guild in Horní Dvořiště was the butcher's guild in 1630. It is evident from other documents, that the bakers, millers, weavers, smiths cartwrights, carpenters and masons belonged to the guilds in Rožmberk nad Vltavou and only established their own guilds in the first half of the 18th century. 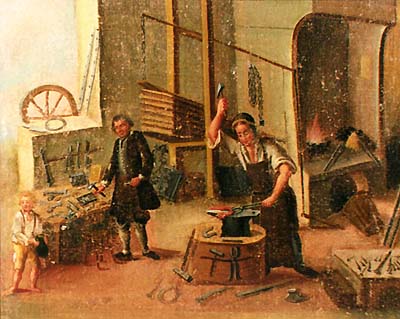 In Hořice na Šumavě it was the monastery of Vyšší Brod that was from 1612 the highest authority and could give permission to the creating new guilds. The first were tailors in 1568, weavers in 1568, also bakers and millers in 1574 and shoemakers in 1793. The local guild together with those of Horní Planá and Chvalšiny had to deal with keeping of the "Mile Law" and with dividing the jurisdiction for markets in neighbouring villages during the 17th century.

In Chvalšiny there were the guilds of tanners and shoemakers (1447), tailors (1515), millers and bakers (1463), weavers (1562), smiths, cartwrights and coopers (1569), carpenters and masons (1779) and butchers (1675). There was a weaving factory in 1722 and the manufacture of hosiery in 1773. The guilds in Chvalšiny tried to gain and defend their sphere of influence with the guilds of Český Krumlov, Lhenice and Horní Planá. There was, as usual, the keeping of the "Mile Law", rights to sell in surrounding villages, rights to decide on the master craftsmen in the village and a preferential right to buy raw materials.

The oldest documented guild in Kaplice are clothiers in 1484. In 1672 count Jindřich Vilém from Starhemberk from Upper Austria, upheld the request of the clothiers from Kaplice to sell their wares at fairs and markets in the county of Mühlviertel and the estates of Waxemberg, Wildberg, Freistadt, Weinberg and Haslach under the condition of demanding the right for Austrian clothiers to sell in the Czech kingdom. The other guilds in Kaplice included the guild of tailors (1561), millers and bakers (1579), smiths and cartwrights (1583) and potters in 1587. There were too many potters in Kaplice and in 1688 they complained that because of overproduction they had to travel too far - to Cetviny and Horní Dvořiště and a lot of their ware got broken during the transport. Until the middle of the 17th century the disagreements about participation of the potters at markets in Freistadt continued. The local craftsmen tried to keep their territory for themselves. Another known guild is the one of butchers, whose privileges were renewed by Peter Wok von Rosenberg, because the privileges given to them by his ancestors were destroyed by fire. A document from 1719 deals with the disagreement between the butchers from Kaplice and Benešov, concerning the participation of Benešov's butchers at the fairs in Kaplice. The document mentions the fact that the butchers from Benešov gained their guild privileges from Marie Magdalena Buquoy in 1638. Those privileges were issued on the grounds of privileges by Ulrich II. von Rosenberg in 1442. He granted the butchers the right to 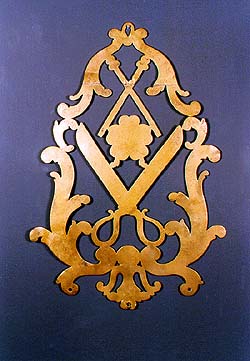 take part at the fairs in Kaplice. It is fair to assume, that the butchers from Kaplice also had their own privileges at the same time. The guilds of stonemasons, masons and carpenters were granted their privileges together with the craftsmen in Nové Hrady in 1611, the guild of shoemakers (1671) - their privilege was lost during the Thirty Years' War - and the guild of furriers in 1603.

The activity of the guilds in Přídolí has been documented only sporadically. In 1688 the weavers who have belonged to the guild in Český Krumlov, founded their own guild. Other guilds in Přídolí were those of smiths, cartwrights and bakers founded in 1698 and the guild of shoemakers and tailors in 1766.

The oldest proven guild in Rožmberk nad Vltavou was the one of the tailors in 1553. In the year 1583 there is a new guild of bakers, millers and gingerbread makers. Into this guild belonged craftsmen from Cetviny, Horní and Dolní Dvořiště and Vyšší Brod. They opposed allowing a new master in their guild as their number was high and they were not able to make enough money for themselves. Other papers document the guilds of butchers in 1597, the guild of stonemasons, masons and carpenters in 1630, the guild of shoemakers in 1729, tanners in 1673, maltsters in 1757 and weavers in 1731.

The guild charter for bakers and millers from 1697 in Rožmitál na Šumavě mentions previous charters that disappeared during the war (probably during the Thirty Years' War) and three fires in the village and the craftsmen were transferred to the guilds in Rožmberk nad Vltavou. In 1748 there are documented guilds of smiths, cartwrights, masons, coopers and carpenters. The guilds of tailors, shoemakers and butchers were established in 1735. The butchers from Rožmitál na Šumavě were mentioned in the charters for butchers in Rožmberk nad Vltavou in 1579 by Peter Wok von Rosenberg.

In Rychnov nad Malší there were in the year 1622 documented guilds of bakers, millers and gingerbread makers and the guilds of potters and lather cutters. In 1774 the guilds of smiths, cartwrights, coopers and locksmiths, in 1785 the guild of maltsters and in 1757 the butchers (in 1606 the local butchers were mentioned in the guild in Rožmberk nad Vltavou as village masters) and the guild of tailors in 1673.

In Velešín there is an incomplete list of guilds - there was a guild of smiths, cartwrights and coopers in 1610, other guilds were the weavers, bakers and butchers in 1693 and the tailors in 1620. 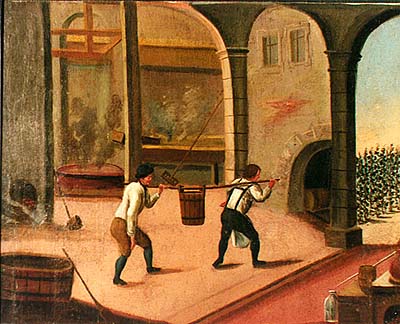 The oldest documented guild in Vyšší Brod is that of potters from 1554, whose charter was lost in a fire. Others were the weavers in 1568, followed by shoemakers and tailors in 1608 - then the bakers and millers in 1725, they belonged previously to the guild in Rožmberk nad Vltavou. In 1648 there was a guild of butchers and in 1724 the guild of hammer-smiths, smiths and farriers.

The preserved documents confirm that our ancestors had to face similar problems in striving for a better living as we do and this fact puts them very close to us. Their legacy is teaching us that in our lives, in fighting for our rights and responsibilities it is important to deal not only with global matters - but especially with seemingly unimportant and trivial details.