The archaeological research of house No. 125 in Benešov nad Černou 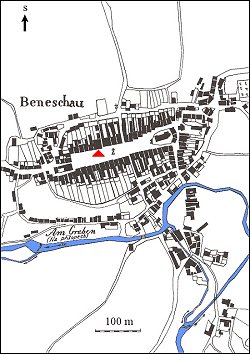 In the autumn 1998 Archeos company did the archaeological research in the courtyard of house No.125 in a small town of Benešov nad Černou. The interior of the extinct elongate wing and its narrowest part of the out-buildings were successfully uncovered. The research introduced new knowledge of the oldest local settlement in the Krumlov uplands countryside during the 14th century. The area of 149 square metres was searched.

The small town of Benešov nad Černou is a typical local settlement dating from the late Middle Ages. Its regular ground-plan is 6.19 hectares in area. It is located on the sloping knoll above the Černá river. A 300-metre long square is an axis of the mediaeval built up space. The complex of houses is situated north of the road leading to the town of Kaplice. It seems to have been remains of the mansion fortified settlement from the 14th century ( No. 116 ). The name of the street called "K zámečku" ( to the mansion ) underlines the theory. The parish church of Jakub Větší ( Jacob The Greater ) with the original town graveyard is situated in the east of the square.

The building course of house No. 125. The house is architecturally very well-preserved. Its beginnings go back to the 14th century. The width of the plot, treatment of the ground-floor and two separate Gothic cellars indicate that there used to be two single plots, where the construction work of the two originally detached houses started. Significant rebuilding in the late Renaissance-style took up the construction phase. The era was chiselled out in the portal. Since then only the inn and crest vault have been preserved in the close area. 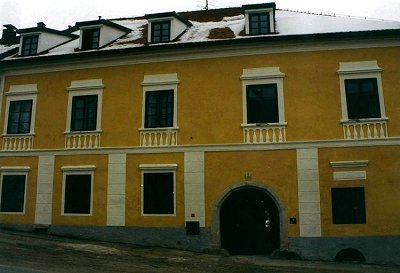 The stone basement from the 14th - 15th century . Two different building technologies were perceptible while uncovering wall relicts in the courtyard of the house. It proved two construction phases. The stone basement object is thought to have been the oldest. It is 5 x 5 metres in area with sloping access and stone steps. The masonry was made of properly fit in little stones, the foundation was built in the ground. There was a wooden floor made of fir boards with simple wooden household-goods in its interior. Several little pile hollows were printed in the sandy base. Most of them had the shape of oblongs or half-circles, and indicated to the original equipment. The door had a very simple pivot. The object came to nothing unrepeatedly during the rebuilding. It was probably in the half of the 15th century on the evidence of pottery discoveries in the ballast.

PBaker´s ovens from the 15th - 16th century. Both neighbouring houses were put together during the rebuilding in the late Gothic period. The interior was uncovered gradually in filling layers. Two fragments of cameral baker´s ovens were recognized. While the first oven ranks among common types, there is a thin brick wall which could not realise thermal operation of accumulation in the other one. We can think of different process of baking or completely different using of the oven. There was no paving in the fire-box space. However, the ash layer was uncovered in the pre-baked hollow. It had resulted from regular fuel sweeping out of the fire-box before thrusting. The extinction of the interior and baker´s ovens goes back to the second half of the 16th century, and can be related to the Renaissance-style rebuilding around the year 1579. A silver coin of Maxmilian II, the Austria Emperor, also dates back to that period.

The Renaissance period. Three preserved pillar feet on the inside front of the peripheral wall prove the Renaissance-style rebuilding. The same construction elements are recognisable in the entrance and other parts on the ground-floor of the house. The preserved and extinct units seem to have been supporting pillars for the storey construction. 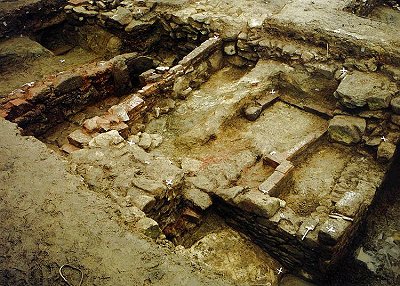 The court wing of the house. The foundation of the stone wall linked to the peripheral wall of the elongate wing was taken in the courtyard wing of the searched plot. The wall at the width of 70 centimetres continued to the back part of the court, where it was attached to the other wall - probably the foundation of the farmstead, which could be seen in the plot until the 18th century. The hollow (2m deep) containing a small collection of pottery from the half of the 13th century ranks among other discoveries. It is very difficult to interpret the object. It could have been the out-flowing or construction building. Not very conspicuous settlement layers containing pottery from the 14th - 15th century were discovered in the whole area.