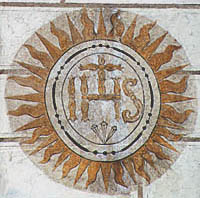 When Václav Šturm finished his studies in the Czech kingdom, he, together with other very promising young men, was sent in the spring of 1555 to Rome to study at the Jesuit college under the leadership of the founder of the Jesuit religious order Ignác of Loyola. At the end of 1558 Václav Šturm returned to the Czech kingdom to his first work place at the Prague Clementinum College. At the beginning of the 1580\'s, negotiations of Jesuits coming to the Rosenberg estates successfully ended. The first four Jesuits whom Václav Šturm led came to the royal town of the Rosenberg sovereign Wilhelm von Roenberg in 1584. Immediately upon their arrival, they began Czech and German sermons as well as a school educational program. From 1590 they opened all five classes of a secondary school. Václav Šturm was the first chancellor of the Jesuit college in Český Krumlov situated in Horní no. 154 street.