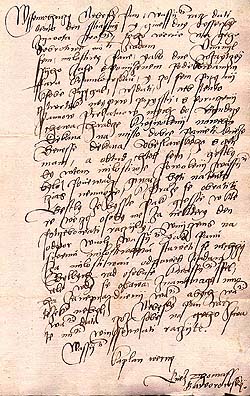 After Tomáš Bavorovský finished his studies, he entered a very successful career as catholic churchman. In 1546 - 1553 during his work at the Plzeň vicarage, he acquired renown as an excellent preacher. He was soon chosen by Wilhelm von Rosenberg, one of whose first priorities was to reform the disconsolate situation in the local school and vicarage attached to the St. Vítus Church in Český Krumlov, for the post of Český Krumlov vicar. He also was among the first members of the restored Literary Brotherhood in Český Krumlov. He soon became publically known as an especially excellent preacher and an uncompromising critic of the present situation: "How many villages and towns, even some larger towns remain without their faithful shepherds and teachers, they can have neither good nor bad shepherds and priests, so many of them wish to suffer because they can not have good ones." He saw the main reason for this in the fact that many churchmen were leaving their professions, getting married, and becoming craftsmen or businessmen, while the vicarages would fall into the hands of custodians who were not properly consecrated and many times weren\'t even ethically competent for their post.