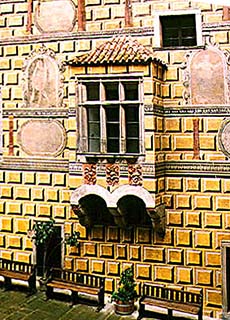 The most eminent figure of the Rosenberg family at the turn of the 15th and 16th century was Peter IV. of Rosenberg, who in his youth studied in Italy at the university in Bologna. He was impressed here by the trends of humanism and the Renaissance, and made friends with the humanistically-oriented Václavem z Rovného, Rosenberg Chancellor. Peter is accredited with the first Renaissance building in Krumlov, the Kaplanka (Horní no. 159) as well as reconstructions of the Krumlov castle with Oldřich Pesnitzer. He also became a significant personage of Czech political life, as his position as the national hetman secured him a part in the government of Jagellion Bohemia. The priviledged position of the Rosenberg dynasty among the Bohemian aristocracy of the day was confirmed in 1500 by Vladislav\'s national administration. Peter IV. also supported economic development on his dominions, namely the fishing industry which developed thanks to Štěpánek Netolický, as well as the mining of silver ore in the Český Krumlov area. As Peter grew older, his psychological condition began to be questionable, and quarrels with his nephews became more and more frequent (he was without children himself). In the end, he passed a large part of the Rosenberg dominion and property to his friend Zdeňek Lev of Rožmitál, which of course caused a great outcry and later debates about the actual status of the Rosenberg heritage.