A priest in Český Krumlov in 1369 - 1414, from 1374 also worked as dean of Doudleby. He came from Bílsko u Vodňan. Together with his brother Ondřej, they both attained knighthood; Hostislav\'s coat-of-arms had a bust of a man while his brother Ondřej\'s contained an axe and closed helmet with a cross above it. Hostislav was doubtlessly honoured by the members of the family of Rosenbergs for his education and righteous character - Peter II, Johann I and Ulrich I personally attended Hostislav´s appointment to priesthood in Český Krumlov in 1369. He also served as secretary of protocol, which ensured his constant contact with the members of the Rosenberg court. Following Hostislav\'s arrival to the vicarage in Český Krumlov, the Rosenbergs turned their favour toward the Český Krumlov church, and very soon this church was leading the neighboring churches, thus intensifying the character of Český Krumlov as the centre of the Rosenberg estates. In addition to gaining renown in the development of an educational system by the vicarage church, Hostislav\'s name is connected with the successful construction of the exceptionally valuable St. Vítus Church in Český Krumlov. 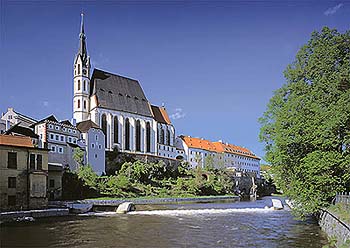 Hostislav invested considerable effort in getting money for the very expensive construction through public collections - such actions had to have the approval of high church functionaries. On request of priest Hostislav, Pope Bonifác IX permitted raising funds via the selling of indulgences in 1402 as well as from a collection being organised in the Prague bishopric - this money was used for the church construction. In 1411 a similar collection was permitted in the Hradec Králové bishopric. In addition to these, Hostislav himself signed an agreement with the stone-cutter Jan in 1407 about completion of the church. In 1374 priest Hostislav was elected Dean of Doudleby and became a representative as well as spokesman for the other priests of the district concerning dealings with higher church dignitaries, especially with the Bechyně archdeaconry. As a result, the authority of the Český Krumlov church office was significantly reinforced. The priest Hostislav served many times as a witness or mediator in different legal proceedings - he was very close to his brother Ondřej who served at important offices in the Rožmberk court, such as royal administrator at Helfenburk castle. The priest Hostislav died in 1414 and on 28 November of the same year his office was taken over by his follower Matěj from Kaplice.