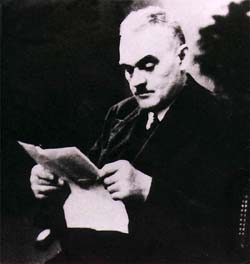 After he finished the German secondary school in Český Krumlov, he continued his studies on the Prague university where he studied ethnography and literature. In 1915, during the first World War, he was captured by the Russian army. From 1919 to 1921 he worked as a representative of the Czech Red Cross in Russia. When he came back to Czechoslovakia, he devoted his time to the sciences. He was one of the founders of a museum and ethnographic association in Horní Planá where he is credited to founding the Museum of Šumava. As a professor of Prague university he studied Šumava ethnography and collected folk songs, fairy tales and legends of the Šumava region. He was buried at Horní Planá cemetery, also the place of his memorial tablet.