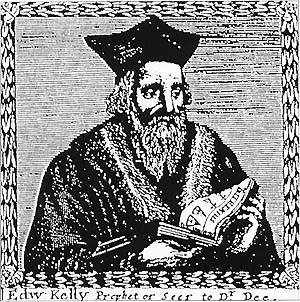 Edward Kelley was one of the famous alchemists at the court of Emperor Rudolf II. von Habsburg. He came from England where he worked as a pharmaceutical assistant and a village clerk until he was discovered falsifying many important documents and was divested of office and punished by cutting both ears. To preserve the rest of his life he chose alchemy, changed his name and hid his disgrace under long hair. During his travels around Europe he met mathematician and astronomer John Dee who served at the court of emperor Rudolf II. He had been chased out of the court, so Edward Kelley took over his post. After 1584 he began to work for Wilhelm von Rosenbergwho showered him with properties. Kelly received the Liběřice castle, the farm Nová Libeň and nine villages. His fabulous promotion was climaxed by a severe downfall, in a duel with Jiří Hunkler who was killed by Kelley. Following the duel Kelley sought refuge in Český Krumlov, but the emperor captured him anyway and put him in jail in the Křivoklát castle. Kelley spent two and half years there, and even intercessions from Queen of England Elizabeth I. or Wilhelm von Rosenberg did him no good. He eventually committed suicide in front of his wife and daughter.