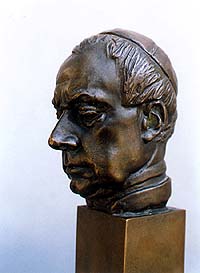 During his studies of law at the Vienna University he decided to dedicate his life to the priesthood, so he went on to study theology in a seminar in Salzburg and on the faculty of theology in Vienna. In 1835 he was elected for the post of archbishop of Solnohradsko and in 1850 he was declared the archbishop of Prague. He is credited with finishing the Prague metropolitan cathedral of Saint Vitus. As Cardinal he took part in the elections of Pope Leo XIII. in Rome in 1878. He was buried in the Saint Vitus cathedral on the Prague castle. His tombstone was made by the Czech sculptor Josef Myslbek.