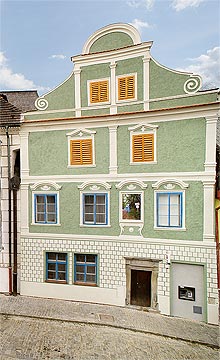 Description of the Building:
A single-storey house with an attic and a volute gable, finished by a semi-circular fronton. We can see traces of several construction stages. The last reconstruction of the house was carried out during Classicism. On the ground floor is situated a richly-decorated Rennaissance portal. We can also find there two additionally divided sections. A chamber is set in the centre of the house. The vaulting of all sections completely differ. The roof crest of the building is perpendicular to the street line. There is an original Rennaissance collar beam truss. In the courtyard is situated a terrace with the remains of an older building.

Architectural and Historical Development:
The oldest part of the building originated in the Gothic period. This is supported by the fact that the first note about the house comes from 1556. The existence of the house in the second half of the 16th century and in the 17th century is indubitable because there were some reconstructions carried out. In 1630 an ostentatious portal was built during one of the reconstructions. The roof truss probably originated in 1630 as well.

Significant Architectural Features:
On the ground floor is situated a richly decorated Rennaissance portal. Barrel vaults without sectors, set in the back aisle, are probably of Gothic origin. 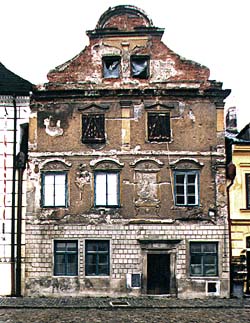 History of the House Residents:
In 1515 the house was bought by a butcher Michal Hlospecen, who had previously owned the former house No. 71 (brewery) for a short time. Michal Hlospecen was a member of the town council for forty years then died in 1548. He was a very wealthy man who also owned an out-building in Rybářská street. His son Kilián, who became a court butcher, took over his trade and the house. In 1556 Kilián was accused by court cook Jeroným in a pub of stealing manorial sheep. The squabble finished at the court of Wilhelm von Rosenberg, who listened to both sides and finally cleared Kilián of the false charge. Kilián died in 1577. After the death of his wife Magdalena in 1580 the house was bought by a butcher Matyáš Muláček, who sold it in 1589 to a carpenter Šimon Schuchmacher. Linhart Kampmüller obtained it in 1600 and lived there until 1628, followed by a stone-mason Kašpar. From 1685 a shoemaker´s trade was run there by the family of Lambl who stayed in the house until the 1790s.