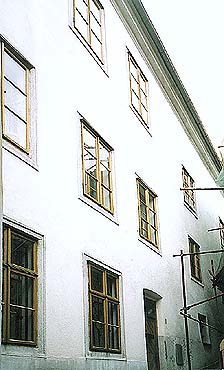 Description of the Building:
Three-storey building with a smooth facade. On the ground floor to the right is a narrow corridor. In the back there is a staircase to the upper floors. The front area of the ground floor is arched with barrel segmented vaults that go into oval passes. In the rear room next door is a fragment of a stone barrel vault. On the first floor is a barrel vaulted area, by the facade with sectors. The other floors have flat ceilings and are not very remarkable architecturally. The building doesn\'t have a cellar.

Architectural and Historical Development:
The building is of Gothic origin. The fragment of the stone barrel vault comes from the oldest construction. In the 16th, 17th and 18th centuries, this was a municipal jail. It gave the name to this street, where the house is located. The house next door, in the direction of the square, No. 3, was the oldest known guildhall of Český Krumlov until 1519. The jail was originally a part of the guildhall building. After 1519, when the guildhall became a residential house, this part still belonged to the city, which was still using it as the city jail. In 1867 it burned down, and in 1869 was radically reconstructed and heightened.