Description of the Building:
A three-storey building from 1867, it disturbs the essential historical estate by its mass. The building was created on the site of a few smaller buildings next to the outer gate of the town fortification, with later street outlines. The gate, already demolished, constituted the ending of the Lazebnický bridge, which joined the town with Latrán. That is why the gate was called Latránská in the 16th century. (See History of Gates and Fortifications in Český Krumlov).

History of the House Residents:
The first known owner of the house was a cook, Jarolím, who was replaced by a utricularer, Jindřich Rotler, in 1573. In 1620, Jiří Precht resided in the house, and from 1638 a butcher, Matyáš Madrina lived there. In 1673 a dresser of Johann Christian I. von Eggenberg, Matyáš Handler or Heindler moved in. In 1735 the house belonged to Jan Jiří Torkowitz, and, after he died his widow Anna Marie took over the house. She married again to Matyáš Heuman, who was allegedly the owner of the house from 1752 until 1785. Antonín and Apolena Wolf bought the house from him. They were replaced in 1806 by Juliana Miková. Until at least the 1840`s the house was occupied by Ignác Miko. 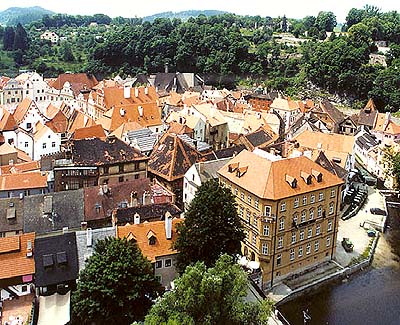