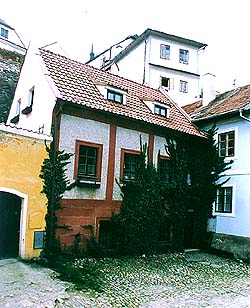 Description of the Building:
One-storey building with Classical facade which was built in 1802 from a stable. On the right of the ground floor is a staircase hall, and on the left is a barrel vaulted area. The present appearance is the result of an older building adaptation in Classical style.

History of the House Residents:
Between the houses Parkán No. 121 and Parkán No. 123 two stables were originally located, and in 1758 Blažej Pofferls\' granary was mentioned. In 1802 Jiří Pfferl built a residential house here and his family owned it until 1807 when they were replaced by František Koidl. Three years later Vincenc Häussler moved into the house and lived there until at least the 1840\'s.