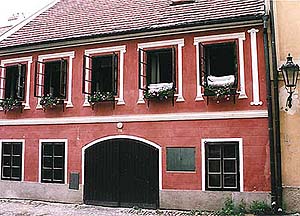 Description of the Building:
One-storey building with a six-axis facade from 1874, and a roof covered with tiles.

Architectural and Historical Development:
The house was build in Renaissance style before 1580. The present appearance of the building is a result of a reconstruction from 1874, when only a few walls were left from the old building including part of the town walls by the river. 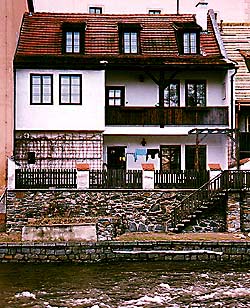 History of the House Residents:
The first known owner of the house was Ondřej Popelle in 1580, who was replaced by Tomáš Höriczer. From 1596 a miller, Mertl Paumstark, resided there, and after him Hans Bernhart, who was replaced in 1634 by Jakob Gesell. From 1660 - 1694 the house belonged to a hewer, Ondřej Mayer. At the end of the 17th and beginning of the 18th century the house was occupied by chimney sweeps. The first one was Bartoloměj Signorell or Erdklein, and from 1708 until 1719, Antonín Ruspendor. In 1731 a croupper, Matyáš Böhm, became the owner of the house. He was replaced by a miller, Bartoloměj Lang. His family resided in the house until 1768. In the last quarter of the 18th century, the house belonged to Novák family. After 1812 the owner of the house changed quite often, and except for names we don\'t have any further information.