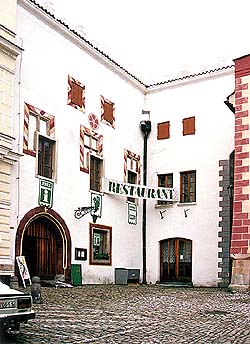 Description of the Building:
This unique, complex, predominately one-story, but in parts two-story building, sits in a somewhat irregular manner on the corner of the square between Kostelni Alley and Zidovska Alley. The front wall that faces the square contains an original, pointed arched entrance portal. During a past reconstruction project, three original stone window jambs located above the present day windows were restored. On the main facade of the building, painted Renaissance decorative works have also been restored. In the interior of the ground floor, there is an expansive entrance hall that has barrel-vaults with lunettes. The rooms in this building are laid out around this central entrance hall. The rooms on the ground floor have got either flat ceilings or are vaulted to the transverses. On the first floor, there is an expansive hallway with a flat segmented vault with a ceiling medallion. The cellars under the southern part of the building contain stone barrel vaults.

Architectural and Historical Development:
This structure can be dated to the Gothic period. The original core of the building can still be seen today. Renaissance reconstruction work to the entrance hall and the first floor took place in the second half of the 16th century. Other alterations were made after the fire of 1879; the Renaissance face was gotten rid of and the layout of the first floor and the back of the building were reconfigured. In 1973, the facade of the building was reconstructed to its Gothic appearance. The restoration of the murals was also completed at this time. Repairs to the facade were made in 1993. 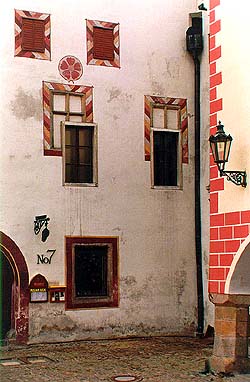 History of the House Residents:
From the year 1500, the building belonged to the Jakoubek family and their descendants. The building was bought in 1521 by Petr Podlaha of Latrán, who sold the building in 1528 to Antonín Ruml of Lichtenau. After 1574 the building was in the hands of the Wilhelm von Rosenberg, who acquired it after the death of the widow of Zikmund Schnurer-Podlahy. At this time, the building was used as the largest travellers inn in Krumlov, which possessed ten beds and forty stalls for horses . In the year 1577 Wilhelm sold the inn to his financial accountant Jan Ledenický-Podlaha. The name Podlaha was added to Jan Ledenický´s original name simply because he lived in this building that was previously connected with the Podlaha name. This small custom prevailed throughout the years and each new owner of the building attached the Podlaha name onto their own. The career of Jan Ledenický-Podlaha as chief caretaker of the Rosenberg Palace in Prague came to a close when he was found guilty of committing illegal financial activities and hung from the gallows in Český Krumlov in 1599. In 1604 the building was bought by the schoolmaster Ondřej Kotelik and in 1645, when the building was in the hands of Bartoleměj Weber, it is documented that beer was brewed and served in the building.