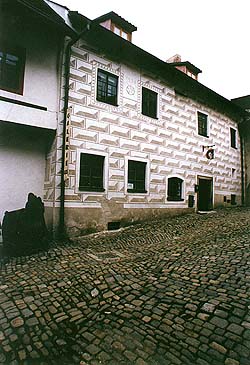 Description of the Building:
One-storey building partially with cellars and a smooth facade. The shallow, laterally located floor plan contains a barrel vaulted hall with lunettes. On the right side of the hall is a small room , also barrel vaulted, and on the left is an area with a joist ceiling. The layout upstairs is similar.

Architectural and Historical Development:
The house is located on the very edge of the oldest city principal by the Gothic walls from approximately the 14th century. It was certainly preserved in the ground floor area. The house was created by building the house into the space between two neighbours and adding to the mural walls. It could be assumed that the house was built in a few stages. The most extensive part was built in the Renaissance an in teh 17th century, which is evidenced by the date 1642 on the entrance portal. Two more significant reconstructions occurred during the Classical period, 1782 - 1786 and 1817 - 1828. In both cases the reconstruction substantially increased the price of the house. During the following years the house apparently wasn\'t adapted, because in 1929 the condition of the house was pointed out as constructionally bad. The constructional renewal took place around 1934, when a bow-window was created on the place of an older structure. 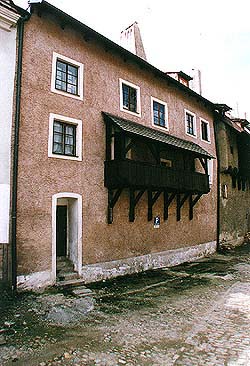 The first documented information about this house comes from 1534 when Štěpánek, alias butcher Štefl, sold it to Jošt Frič from Horní street for 105 threescore of Meissen groschen. Frič sold the house to a higgler Markéta. Until 1547 her husband, Jeroným Čandl, paid off the house, and in 1548 sold it to a twister, Hans Krautsekl. From Hans a butcher named Mates bought it in 1553 for only 120, and in 1557 sold it to Petr Trojanský for 155 threescore of Meissen groschers. In the following two decades records are missing about the house assignment to Bartoloměj Habenstier. In 1572 he sold the house to Anna Senffová. Anna Nestlerová took over her market in 1573. In 1588 the stepfather of Anna\'s children, a cutler, Hans Vischer, bought the house with the entire estate from Anna\'s children. One year later they sold it to a tailor, Ambrož Atheser or Churfürst. From him a cooper, Ondřej Seicz bought it, in 1600. His widow, Ludmila Seiczová, transferred the house to their son Jan, who was also a cooper. After Jan died, his widow Anežka took care of the house until the end of the century, when the house was inherited by Markéta Schugsgeierová (Schoissengayerová). In 1696 she sold it to a shoemaker, Jiří Stifter. In 1720, Anna Marie Fostlová, widowed Stifterová, sold the house to a saddler, Tadeáš Langer. From him a princely court furrier, Augustin Počkej bought it in 1753. In 1755 Augustin transferred the house to his son Matěj. He then sold it to his son-in-low, Bernard Peyer (Bayer), a tenant in the princely mill before the Latrán gate, and he set the condition to have a functional flat in the "bottom chamber" using a "closet by the upper summer-house". In 1786 Payer sold the house to a furrier, Josef Schönbeck. He in turn sold it to a shoemaker, Vojtěch Peperl, with the initiation of a brewery licence in 1801, in the time of the war. From a widow, Terezie Peperlová, a draper, Ignác Kiesewetter bought it in 1808, and in the same year sold it to a tradesman, Vincenc Zudrung. Another merchant was a shoemaker, Evžen Malschinger, in 1810. In 1817 he exchanged the house with a tradesman, Heřman Pinsker, for house No. 25 on the street Radniční. Pinsker apparently bought the house for his stepdaughter, Terezie Penšíková, and transferred it to her when she married a carpenter, Josef Žalud, in 1819. He made a condition to have a flat "in the top room on the left from the stairs". In 1834 the house was given to the execution auction creditor because of Žalud`s debts, and the house wasauctioned off. A butcher, Antonín Platzer, bought the house for his stepson, Michal Schmall. In 1837 Schmall sold it to Josef Košťál. The house was again sold in the execution auction for the highest offer to a currier, Václav Wernhart. He then sold the house a butcher, Anna Hrubešová, in 1843. The Hrubeš family owned the house until 1929.

Present Use:
On the ground floor is located Gallery 134.