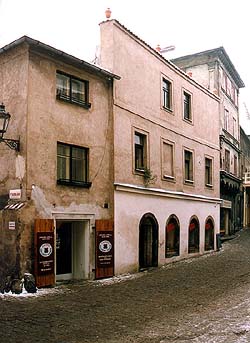 Description of the Building:
Two-storey building with a smooth facade which in its lower part turns toward the street Radniční, and culminated by an attic with two terracotta vases. On the facade is a painted clock dial, restored in 1987. The two wing layout on the ground floor is completely barrel vaulted. The upstairs is vaulted, and the staircase hall is in the middle. The rest of the rooms have flat ceilings.

Architectural and Historical Development:
The house is of Gothic origin, documented from the beginning of the 16th century. The facade on the street Radniční was adapted Classically and restored in 1987.

Development of front side facade:
While in the main facade facing Radniční Street, considerably adapted around the year 1844 after the Inner Gate of the Inner Town had been demolished, no remarkable discoveries from earlier periods were found, the exceptional finding situation appeared in the side front.In the Middle Ages the building was built up to the first-floor level with the use of a rough plaster layer with smooth plaster frames all over the window holes.The adaptation of the front part of the side facade and the application of an all-surface grey-coloured coat of paint including the new window holes framing with black lines were done in the earlier periods.In the early Renaissance period the window holes framing was scraped in a new plaster layer, in the late Renaissance period the front was decorated with the rectangular-shaped rustic-work and cut out corners in an illusion way.


The scraped window shams were onamented with plant motives. In the Baroque period only some coloured adaptations were done on the plaster layer: white-and-green, white-and-ochre, white-and-red.In the Classicism period the building was covered with an all-surface green-coloured coat of paint, linked up to some main front changes, later the pink-coloured paint was applied. The development of plaster phases in the main front was fixed by a restorer and replastered. Both facades were covered with the lime paint in two green-coloured hues. We do not know the analogy of the graffito scheme with the Baroque style decoration in the Czech surroundings. 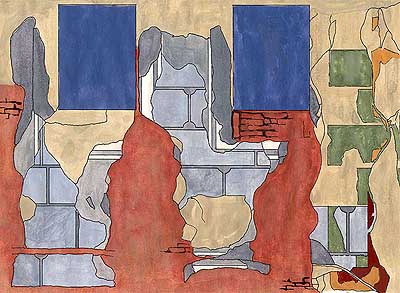 History of the House Residents:
The first known owner of the house was Markéta Křížková, who was in 1524 replaced by Linhart. In 1530 the house belonged to Hans Woldnar, after whom the house was taken over by Uršula Kreidenwiessová or Waldnerová. Until 1573 a currier, Michal Helbing resided there, and after him in 1596 a saddler, Mates Schmider, lived there. From 1606 - 1621 the house belonged to a miller, Pavel Maurer. The next owner, who shortly resided in the house was Erasm Gampole. In 1621 Jan Netting moved into the house. In 1640 a butcher, Eliáš Preybische, lived there. In 1641 he was recorded as the owner of the house No. 151 at the street Horní. In 1642 - 1668 a shoemaker, Baltazar Stimb, resided in the house, and in 1677 was replaced by Pavel Forko. He bought the house together with a boiler for washing and burning alcohol. The next owners of the house were a miller on Parkán, Ondřej Matuna, and from 1682 Matyáš Placeda. In 1713 the house was occupied by a lace maker, Matyáš Dorn, and during 1720 - 1732 a soap-boiler, Josef Dicatana, lived there. In 1742 Matouš Osiniov was replaced by a currier, Josef Simerl. In 1753 a tradesman, Florián Habensteuer, inhabited the house, and in the same year a miller, Adalber Raab, became the owner. Two years later he was replaced by a watchmaker, Jan Mikuláš Heinemann, and from 1797 a furrier, Josef Thaller, lived there. The next owner, during 1802 - 1822, Jan Linko, was also a furrier. After that the ownership of the house was transferred to fruiter couple, Vít and Terezie Jech. In 1834 they were replaced by Jan Pöschko.