Description of the Building:
The house "U města Vídně" (tr: at the city of Vienna) is a large complex of buildings. The main building has a facade with letter-shaped sgraffito, stucco decorations around the windows, ornamental bands with flowers and rough-hewn plastics. There is a five-petalled rose above one of the windows on the second floor and the year 1561 and letters "WH" above another. The left side, separated by a vertical line, has a different style of sgraffito. There is also a carriage-way. The right short front has an oriel supported by a cantilever and a column. On the right side of the courtyard, there is a one story modern house and a four story modern house in the back.

Architectural and Historical Development:
This is a medieval house. The plot is located in the vicinity of the original Latrán gate (see History of gates and fortification of Český Krumlov). The cellars and the first floor of the main building are Gothic. Renaissance reconstruction took place around 1561, as evidenced by the year with "WH" on the facade. New vaulting was constructed on the first floor and the second floor newly built with carved ceilings that might have been painted. The third story was probably an attic during Renaissance. In 1799, the house and the front underwent a Classicist reconstruction following a fire. The second story was reconstructed into today\'s condition in 1873. Other modifications took place in 1883 and 1893. Between 1929 and 1931, the older wing was replaced by a four story building of the hotel with a wing for the kitchen. New truss and attic were added in 1934. In 1939, painter Adolf Jobst from Český Krumlov renovated the sgraffito.

Development of facade:
On the basis of the rough-smoothen plaster discoveries, we can assume that the building reached the first-floor level in the Middle Ages. In the Renaissance period an attic gable floor was built, a part of the facade was newly walled and articulated with pilasters and a cordon ledge. The left part was decorated with the hipped-pyramid-shaped graffito fields and perhaps due to the same height and linking up the graffito design it created one unit with neighbouring house No. 78. 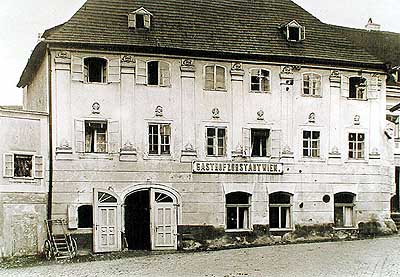 Window holes at levels were pointed up by the plant decorative frame and the space among them was filled by the graffito decorative vase with flowers. The right part of the facade was more decorative with a large number of ornaments including the year of the Renaissance facade origin, 1561, and probably finished by the attic gable. The rustic-work pilasters may have been finished by the capitals and linked up by the head ledge.

The rustic-work cordon ledge used as the base of plastic pilasters was originally appr. 30 cm higher than the present state is. In the early Baroque period the facade was articulated with a white-and-grey-coloured scheme, without any other plaster restoration. The facade was articulated with a high pilasterdesign, with the use of the Renaissance pilasters, and finished by the current head ledge, the parterre was articulated with the rectangular-shaped ornaments or band rustic work.In the Classicism period , after the fire in 1798, only some smaller adaptations were done there. In the pre-war period all-surface coatsof paint were applied (ochre and grey paint), and in 1939 some particular plaster restorations with the presentation of the Renaissnace facade. 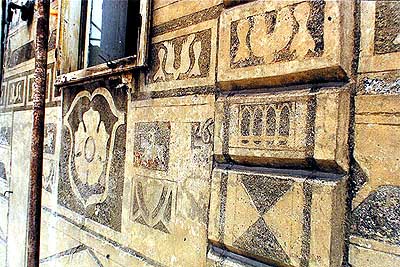 The complete restoration work was done in 2001, 2002. Although they pointed out the facade exception with the unique collection of the original graffito abstract fields, the original technology was not used. The scraped graffito field surfaces were covered with the silicate ochre-coloured paint, so the basic art design based on the contrast of the white-coloured smooth surface and scraped surface is not almost applied.

Significant Architectural Features:
This is one of the most important landmarks of Renaissance burger architecture in Český Krumlov. Besides the above mentioned cellars and Renaissance facade, also remarkable is the complicated interior layout of the second floor. Artistically, the most valuable is the room in the left part with a plain ceiling, oriel with rich lierne vault and groins and around windows in the front with segmental uneven arcades standing on hemicycle and half-hemicycle columns. The adjacent space next to the street has cross vault with groins. The room on the left side of the layout has segmental uneven arcades near the walls perpendicular to the facade and also a richly profiled stucco span on the ceiling.

History of the House Residents:
The first written record about this house is from 1565 when it was owned by Hans Masserhansl. His son baker Hans lived here until the first decade of the seventeenth century. The property was worth 430 three scores of Meissen groschen in 1611. The baker family Porth owned the house from 1655 to 1778. A bread shop used to be here at that time. There was a fire in 1798 but the house continued to be used as a bakery after the fire. In 1870, Tomáš Soukup requested permission to carry out a reconstruction of the house "U města Vídně" so it would be "more efficient as an inn". In 1929, Jiří Kerschbaum purchased three stand-alone wings of the neighboring Claretian convent. The hotel building was erected between 1929 and 1931.