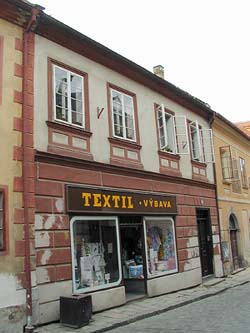 Description of the Building:
Two story building with a modern interior layout.

Architectural and Historical Development:
This is a Gothic house that was reconstructed during the second half of the nineteenth century. The interior layout is modern, part of the rear part of the house has barrel vaulting.

History of the House Residents:
In 1525, the house was owned by a furrier and later by his widowed wife furrier Kateřina. Cartwright Bicek lived here during the 1530s, followed by a woman of the same trade named Kateřina Kolemová. Potter Markéta Hanslová bought the house in 1579 (she is probably the widowed wife of Hansl - Jan). Castle cook Ondřej Zajíček lived in the house in the beginning of the seventeenth century. Shoemaker Hans Romersdorf exchanged his house Latrán No. 44 for the No. 69 house with Jan Petit in 1676. Court gardener Ondřej Ingel lived here from 1687 to 1723. Weaver František Schrutz moved into the house in 1745. After him, the house was owned by shoemaker Matyáš Thein and then by another shoemaker named Matyáš Vondrák. His family lived here until the 1830s.

Present Use:
Výbava textiles and an apartment.