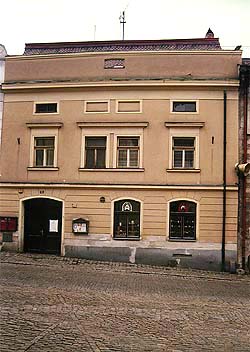 Description of the Building:
Two story building with a modern brisolit front. There is a low attic above the geison. There are two courtyard wings on both sides of the house and a small structure in the back of the plot. There is a carriage-way on the first floor in the left with a Welsh arch and a stairway in the back.

Architectural and Historical Development:
The oldest structure on this plot was Gothic. The house as we know it today is the result of a radical Renaissance reconstruction. The facade was modified during the second half of the seventeenth century but later damaged by modern intervention. 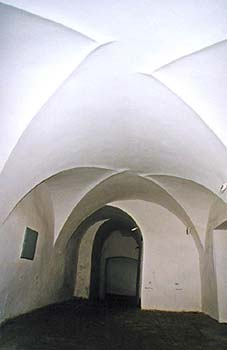 Significant Architectural Features:
Remarkable are the vaulted spaces, mainly the carriage-way as well as several rooms on the first and second stories. The left wing in the courtyard originally had wall arcades but they were later partially immured. A connecting gallery with a cornice with corner caps and groins runs along three sides of the courtyard. The Renaissance facade may be hidden under the plaster.

History of the House Residents:
Written records state that the first owner of the house in 1484 was Ryneš (known as Krbek) who owned the house until around 1510, when shoemaker Martin moved in. He lived here until the end of the 1530s. Jiří Beispoch (or Weissbach) moved into the house in 1540 and lived there until he died in 1568. Baker Linhart Tschandl became the next owner, paying for the house in installments to Beispoch\'s son Kryštof. Tschandl sold the house in 1571 to Jan Schofik who also owned the house No. 41 in Latrán and who lived in No.54 with his wife and eight children. Schofik died in 1588 and his wife Kateřina stayed in the house. Kateřina Schlofiková died in 1591 and the house was then used by Kryštof Kranz who later that year married Kateřina\'s daughter Alžběta. Alžběta had five children with Kranz and died in 1600. Kryštof Kranz then married a different Alžběta and died in 1609. 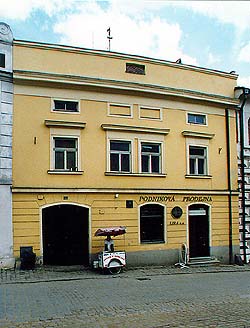 Butchers lived in this house from 1653 to 1714. The first butcher who lived here was Bartoloměj Streinz, followed by Matyáš Beránek. In the beginning of the 18th century, the house belonged to butcher Jiří Stifter. Tawer Albín Fleischer moved into the house in 1714 and stayed until 1737. There was a tavern in the house for some time. From 1782, the house was owned by Schwarzenberg engineer Josef Rosenauer who designed and built the well-known Schwarzenberg Navigational Canal in the southern part of the Šumava mountains. His family lived here at least until the 1840s.