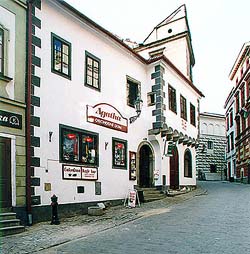 Architectural and Historical Development:
Late Gothic house with plain facade. The second story stands on ancons, some windows still have stone lining. The hall with stairway on the first floor has a Welsh arch; also some of the rooms on the second story are vaulted.

Significant Architectural Features:
The second story is supported by ancons. 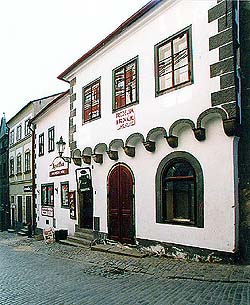 History of the House Residents:
An Italian known as Romanus about whom we have no information lived in the house in the beginning of the sixteenth century. In 1510, Petr Podlaha purchased the house and lived there until he died in 1532. From 1521 to 1528, Petr Podlaha also owned the Náměstí No. 7 house. His wife Voršila sold the Latrán house after her husband\'s death to Václav Kantor. Widowed Václav\'s wife Barbora stated in her will that the house should go to her two sons Augustin and Šebestián. However, because both of them were organists not living in Český Krumlov, they decided in 1541 to sell the house to baker Hanzl. In 1543, baker Anna whose husband had "run away" sold the house to hatter Jan. He did not live in the house for a long time either, as he sold it in 1545 to locksmith Keršl. After Keršl died, his wife Kateřina married again in 1584, to another locksmith Kašpar Pleminger who lived in the house until 1602. Shoemaker Hans Romersdorfer who also worked for the Český Krumlov castle moved into the house in 1641. In 1676, he exchanged his house with Jan Petit for the house Latrán No. 69. In 1692, the court cellar-man Michal Petermann moved in. Franišek, Antonín and Josef of the Gallo family used the house for the soap boiling trade from 1736 to 1794.