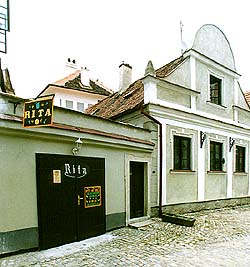 Description of the Building:
One story building with a front gable.

Architectural and Historical Development:
The house was built during Renaissance. The cornices and the elemental part of the gable are from Renaissance but the gable along with the lower part of the house\'s front was modified in a Classicist style. The attic has undergone a modern reconstruction.

History of the House Residents:
The first known owner of the house was Bartoloměj Doucha. His wife Magdalena inherited the house in 1563. Bartoloměj Doucha was born in the Latrán No. 21 house, which was used by his brother Jakub. Bartoloměj died childless, so the house was then bought by rope-maker Adam Perner. After he died, his wife Salomena sold the house in 1593 to baker Florián Hausenperger. Because he lived with his family in the house Latrán No. 18, this house was more of an investment to him. Tomáš Krumpenagel bought the house shortly after 1600. In 1620, court blacksmith Řehoř Schweighart or Švankort moved in, and records show that he is mentioned as the owner of house No. 22 in New Town two years later. In 1623, Filip Šimon Šťastný became the owner, followed three years later by brewer Bartoloměj Schaffnak. After his death, his wife Alžběta lived in the house, remarried to Jakub Bezchleba. He owned the house probably until 1646. A clerk at the prince\'s court named Václav Pree lived here from 1745 to 1758. The next two years, violin-maker Benedikt Figlmiller lived here. Chimneysweep Josef Kampeta lived in the house from 1760. Butcher Josef Thaler owned the house during the 1790s.

Present Use:
Residential house. Rita - glass engraving has its office on the left side of the ground floor.