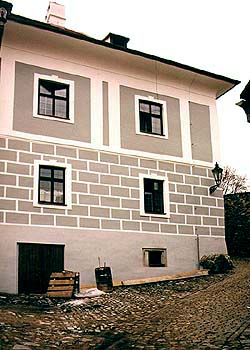 Description of the Building:
A large two-story building with facade articulation dating back to the second half of the eighteenth century.

Architectural and Historical Development:
The oldest building on this plot was the Rosenberg granary. Later, a playing first or a dancing hall stood here. The building standing on the plot now is actually an older building from 1775.

Significant Architectural Features:
Remarkable is especially the facade and the only hemicycle barrel vault on the ground floor. The cellars are also stone barrel vaulted into arcades among three pillars.

History of the House Residents:
The owner of the original granary, a Latrán burgher named Michal Rabas sold his house in Latrán and probably also his storage houses and barns in 1516. The granary was bought by the Rosenberg Krumlov estate administration and the name "Rabas granary" was used for it until the seventeenth century. According to a record from 1545, the granary had four stories, so-called lower, middle and higher attic with a total of 3378 tubs (approximately 2365 hl) of rye. In 1664, the building was reconstructed and became a playing first. It was used as a gym for ball games by the younger Eggenbergs and Schwarzenbergs until 1763. Then it was rebuilt and became a residential building. In 1764, a clerk dealing with orphans lived in the house.