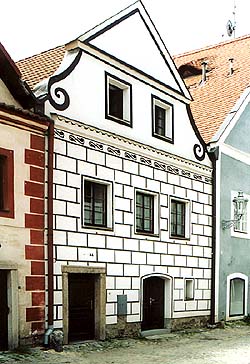 Description of the Building:
Two story building with a Classicist volute gable and tympanum. The facade is divided by stucco decoration framing the window. The rear wing is separated by an exceptionally thick wall. The facade has letter-shaped sgraffito.

Architectural and Historical Development:
This is a Gothic house but the rear wing was built later, as is evidenced by the thick wall that separates it. During Renaissance, the second story vaults were modified and the rear wing probably built. The front is Classicist.

Significant Architectural Features:
Historically, The house is not very valuable. Only some of the vaults and the street front with gable are of some value.

History of the House Residents:
In spite of the fact that the house is Gothic, the first records about its inhabitants are from the end of the sixteenth century. In 1600, Kryštof Täxer was replaced as the owner of the house by leather cutter Matyáš Loybl who lived here until 1614. Tin-man Kašpar Salzburger who also worked for the Český Krumlov castle lived here after him. In 1622, brazier Hans Precht lived in the house in 1622, and butcher Bartoloměj Steinz from 1627. From 1640, he was also the owner of the neighboring house Latrán No. 23. Blacksmith Ambrož Klapeček bought the house in 1644. Cartwright Wichl lived here from 1657 to 1670. His wife Eva took over the house after he died. In 1686, blacksmith Jiří Schmidt moved in, followed five years later by brazier Kristián Paumgartner. Butcher Jáchym Streintz moved into the house in 1704. Court cartwright Šebestián Saltzer lived here after him, followed by servant of the prince Jan Kern who lived in the house from 1714 to 1738. Hatter Václav Perger lived here from 1743, followed by wig-maker Jan Antonín Schmelzer who lived here from 1761 to 1783. In 1786, cloth-maker Josef Jopst moved in and his family lived in the house during the first half of the nineteenth century.