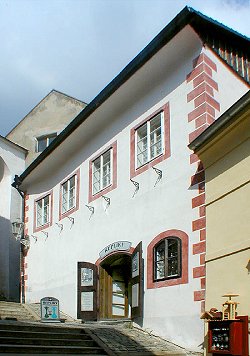 Architectural and Historical Development :
Two-story late Gothic building, reconstructed during Renaissance and Classic periods. The entrance to the vaulted spaces of the first story leads through a Gothic saddle portal. The floor plan of both stories is irregular, and parts of the house have vaults. There is a wooden gallery on the second story.

Significant Architectural Features :
There is a Gothic saddle portal and a Baroque mural painting of a bear in a window. The painting underwent restoration in 1994. 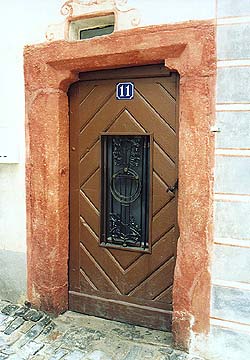 History of the House Residents :
This is probably the house that Petr IV. von Rosenberg gave to his "loyal servant" trumpeter Kašpar in 1518. In 1527, the widow Manda (Magdalena) sold the house to cooper Michal. The next owner was the Rosenberg chancellor Mikuláš Hultzšporer of Hoštejn who lived in the house in the 1540s. During the 1570s, the house was owned by Jindřich Humpergar, who then sold it in 1579 to Rosenberg courtier Jan Kysaur. Kysaur died in March of 1592 and was buried in the cemetery near Minorite Monastery in Český Krumlov. The last Rosenbergs then took over the house. Petr Wok von Rosenberg sold it 1592 to joiner Oldřich Texner. However, because he already owned the Latrán No. 19 house in which he lived with his family, he immediately sold the house No. 11 to locksmith Filip Prunner. Prokop Weigl lived in the house for a short period of time in 1599 but sold it later that year to gunsmith Martin Schiffer who paid for the house in installments until 1623. Gunsmith Martin and his bride Anička were one of the five couples in the wedding given by Petr Wok von Rosenberg on October 18, 1599. Between 1643 and 1668, the house was owned by another gunsmith (actually a manufacturer of gun buttends) Ondřej Niekl, followed by shoemaker Ignác Hőlzl. Vít Oberecker, who owned the house from 1698 to 1726 was also a shoemaker. Gunsmith Kristián Haups lived here since 1756. In the beginning of the nineteenth century, the house was owned by chimneysweeper Antonín Hauška. 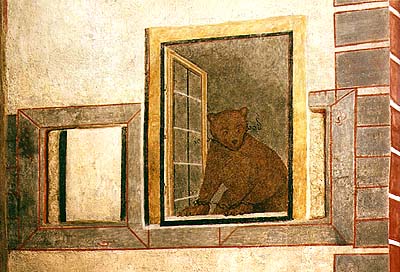